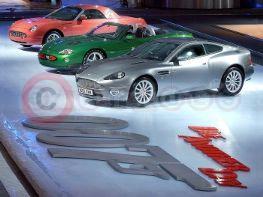 The Jaguar XKR makes a spectacular debut in the forthcoming new James Bond movie DIE ANOTHER DAY to be released in the UK in November 2002.

The looks and sporting character of the XKR made it an obvious choice for this action packed movie – and the villainous Zao, played by Rick Yune, was quick to appreciate his choice of car.

But seductive styling alone doesn’t give Bond’s adversaries the edge over 007 they’re looking for, which meant some very serious modifications were needed. In addition to the obvious visual differences to a standard XKR, Zao’s Jaguar bristles with an array of weaponry that includes a Gatling gun centred behind the driver and passenger seats, missiles that emerge from the front grille, concealed door-mounted rocket launchers and a rack of mortar bombs in the boot. The XKR also features a bulletproof screen to keep Bond’s bullets at bay.

From the very first stages in the development of the movie – which sees Pierce Brosnan as 007 in an Aston Martin Vanquish and Halle Berry, who plays Jinx driving a Ford Thunderbird – Jaguar Advanced Design collaborated with Eon Productions to create the perfect car for a Bond villain.

The Jaguar XKRs used in the film were built at Jaguar’s HQ in Coventry, UK and then worked on at Pinewood Studios, England, UK, by the special effects team to complete the conversion from sleek road-going sports car to menacing mean machine. In all, eight Jaguar XKRs were used in the filming of DIE ANOTHER DAY.

Four cars were modified to handle the icy terrain where the main chase in the movie is filmed, being converted by Eon to four-wheel drive using Ford components and fitted with a Ford 5-litre V8 engine producing 400 bhp. The other four XKRs retained the standard Jaguar V8 engine and rear-wheel drive chassis.

Two further ‘cannon’ cars (bodyshell only) were provided for use in clips where explosive stunts called for an ultra-lightweight vehicle.

A television advertisement depicting the role of the Jaguar XKR in the movie will be aired from the beginning of November in UK, USA, Germany and Australia. It will also be used in Japan in February 2003 to coincide with the Japanese launch of the movie.

This is a 19-year+ news article, from our Jaguar archive, which dates back to the year 2000.

If in doubt check with your local Jaguar dealer as car prices and technical data will have changed since 2002.