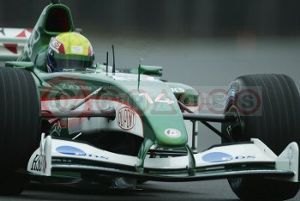 David Pitchforth – Managing Director, Jaguar Racing
What Is The Design Philosophy Behind The 2003 Jaguar R4?

“We learned an awful lot of lessons last season from the R3 and even though we began the season with a less than satisfactory race car, we actually finished the season with a sound platform that has benefited some areas on R4. With that in mind, we have not taken a radical approach to R4. Some would say that we have gone back to basics but overall, we have opted for a conventional, low risk and robust design with the aim being to show lineage to the successful modifications to the R3 and best engineering practice.”

Where Has The Philosophy Come From?

“The philosophy for the R4 actually started with the R3. We wanted to take the R3 and develop it so it responded logically to the changes and could be used as a platform for the R4. We started with the aerodynamics and from there progressed through the entire R3 structure, ensuring a continuous process of development. The lineage with the R3 is clear. We basically looked at everything to see where there was room for improvement.”

Which Areas Have You Focused On In Particular?

“We focused on absolutely everything to ensure that we contest the season with a race car that is capable of being competitive and finishing races reliably. It sounds obvious, I know, but that’s not how Jaguar Racing began last season and by the time we had worked out the problems with R3, most of the season had passed us by. For this season, we have targeted maximum and continuous aerodynamic downforce development and efficiency whilst maintaining the balance capability of the package. Ben Agathangelou (head of aerodynamics) has undertaken some very diligent work in this area and the benefits of our own windtunnel are paying dividends. Ben’s experience and process-led approach has helped us generate a significantly clearer path towards our end target on downforce – something that is on-going throughout the season. It is fair to say however, that we didn’t extract the maximum from the Michelin rubber last year and given the competitive edge that tyres have to offer in this business, we have worked very closely with Michelin to better understand the issues we needed to address on R4.”

What About The People Behind The Philosophy?

“We have clearly laid down responsibility within the team, by specifying the details of the car and the guidelines as to its design. There is no doubt that everyone involved in Jaguar Racing understands their responsibility for the design of the car. We have limited duplication by doing this and ensured that the key people are working in their area of strength. These people have become disciplined in delivering to deadlines, as a result of the work that was carried out on the R3 late in the season, the R4 had to be designed to a tight time-line. It is this sort of company ethos that we will look to carry forward with us in the build-up to R5. This philosophy is not just at Jaguar Racing, but also throughout both Cosworth Racing and Pi. By pulling our resources together and building on our relationship the responsibility factor has only strengthened. R4 has very much been the first step along the road to including all engineering and operation departments in the design of the car. As we move closer to R5, input will be expected from mechanics and electrical specialists, a truly holistic approach is now being taken.”

“The Cosworth CR-5 V10 is an all-new engine. It is the first time Cosworth has raced with a 90-degree engine layout and the key benefit as opposed to a 72-degree engine is improving the centre of gravity. Cosworth has done an excellent engineering job on the CR-5 and in addition to the 90-degree V-angle, a lot of clever work has been undertaken on the packaging. It’s new ground for Cosworth Racing and it’s certainly new ground for Jaguar Racing in that we have always raced with a 72-degree engine. The benefits of improving the centre of gravity cannot be overstated and coupled with the fact that the power band has been pushed even higher, we are naturally excited about the powerplant for this season. There is, however, a lot of development work ahead of us at all levels and until qualifying begins in Melbourne, it is impossible to make predictions at this stage.”