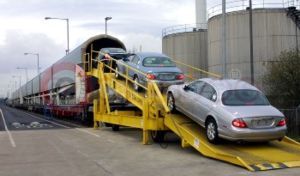 Jaguar Cars has been named National Champion in the Green Apple Awards 2003. This is the sixth year in a row that Jaguar has won a Green Apple Award in the national campaign to find Britain's greenest companies.

Jaguar Cars won this year's major award in recognition of improvements to its rail infrastructure having added a new railhead at its Castle Bromwich plant in Birmingham. This has enabled Jaguar to vastly reduce the number of car deliveries made by truck, significantly benefiting the environment. The new railhead was officially opened by Princess Anne, the Princess Royal, on 18 March this year.

Kevin Wall, Jaguar's Director of Material Planning and Logistics, collected the prestigious award at a special reception at the House of Commons, hosted by The Rt. Hon. Patricia Hewitt MP, Secretary of State for Trade and Industry. Mr Wall said: "We are delighted to have received the Green Apple Award for the sixth year running. It is a fitting tribute to all the hard work and dedication of a team of people including Birse Civils, Bride Parks Infrastructure and Network Rail who partnered Jaguar in the Castle Bromwich development."

The £10 million railhead project is delivering significant logistics efficiencies and environmental benefits. The railhead comprises two new rail sidings and an 18 acre terminal facility capable of holding 1600 finished vehicles for marshalling/despatch to one of Jaguar's 63 overseas markets. Jaguar exports some 75 per cent of production and up to 50,000 vehicles built at Jaguar's Castle Bromwich and Browns Lane sites will leave the terminal each year, making it one of the busiest heavy-freight railheads in the country.

The Green Apple Awards are organised by The Green Organisation, an independent, non-profit environment group dedicated to recognising and promoting environmental best practice.