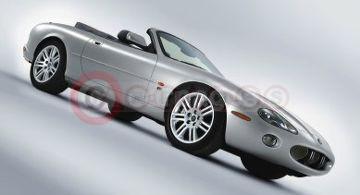 Few cars turn heads and raise pulses like the Jaguar XK – and now there is a new generation of this thrilling luxury sports car, enhanced by major powertrain improvements and a host of new features.

When the XK8 was introduced in 1996, it set new standards in the luxury sports car market. Two years later, the supercharged XKR lined up alongside, raising levels of driving excitement, style and performance still further.

Now, for the 2003 model year, comes an extensively revised successor to the beautiful coupe and convertible XKs that have so delighted owners and bystanders alike.

The classic XK style does not change with this new generation, the revised styling details inside and out providing a subtle variation on the theme rather than a new look. That can come as no surprise with a car that is universally regarded as an example of automotive beauty, and to many eyes has matured to become even more attractive than it was when launched.

But under the skin it is a very different story. Larger, more powerful 4.2-litre V8 engines significantly increase the performance of the XK. A world-leading six-speed automatic transmission ensures that drivers are able to make the most of the power when they choose, yet be equally at ease in urban traffic. And a portfolio of enhanced electronic and other equipment options – focusing on safety, comfort and drivability – make the new XK even better to drive than the original.

"The engineering changes made to the XK for 2003 are substantial and significant. The extensively revised powertrain, with the new, larger capacity 4.2-litre engines and six-speed automatic transmission, contributes to an improvement in every aspect of the driving experience." Russ Varney, Chief Programme Engineer

At the heart of the revised XK range are two new 4.2-litre V8 engines, one naturally aspirated, the other supercharged. An evolution of the now-familiar 4.0-litre AJ-V8 engine that was introduced in the first XK8, the larger capacity and subsequent increase in power and torque make the performance of the XK even more scintillating. Coupled with the more muscular engine is the state-of-the-art, electronically-controlled, six-speed automatic transmission that made its Jaguar debut in the new S-TYPE R. Built by ZF, it is the first example of a ‘stepped’ (as opposed to CVT) six-speed automatic transmission.

A Familiar Personality, With Major Developments

The 2003 model year XK benefits from a broad programme of improvements – there are some 900 part number changes – underlining the fact that while its appeal may be timeless, development of this sporting Jaguar has certainly not stood still. Now with 300bhp (DIN) in the normally aspirated XK8, or a full 400bhp (DIN) in the supercharged XKR, the XK is now even more impressive than the car that has earned the model its reputation. In fact, the 400bhp XKR shares with the latest S-TYPE R sports saloon the distinction of having the most powerful series production engine in Jaguar’s history.

The package of advances over the previous generation XK also encompasses the latest electronic driving aids. Covering areas from handling and braking to ‘intelligent’ cruise control, these include Dynamic Stability Control and Emergency Brake Assist as standard across the XK range, and Jaguar’s innovative, traffic-sensing ACC (Adaptive Cruise Control) as an option.

And while performance is unashamedly a core value of the XK, safety also remains at the heart of the equation. The XK continues to offer industry leading features across the entire range, including Jaguar’s A.R.T.S. Adaptive Restraint Technology System (with the world’s first ultrasonic occupant sensing to control airbag deployment), and the option of ACC now enhanced with Forward Alert, an additional feature that audibly warns drivers of slowing traffic ahead.

"One of the core values of the new-generation XK is the purposeful use of relevant electronic technology to significantly enhance driving enjoyment and safety." Dick Elsy, Director Product Development

Externally, the changes to the XK are subtle, which is no surprise given its acknowledged sensuous beauty. The styling has always been about more than fashion and those powerful, assertive curves are still one of the XK’s strongest selling points. Jaguar research shows that customers see the car as stylish, beautiful and totally individual, with a character quite distinct from any rival.

Where the XK has visually changed, the actions have been taken to ‘freshen’ rather than reinvent. The cars sport new badging, and there is a choice of four new exterior colours, a range of new interior trim combinations and three new wheel designs. The introduction of Xenon headlights – as standard on the XKR and optional on the XK8 – gives the front of the car a distinctive new look.

The latest R Performance range of options (available on both XK8 and XKR) includes unique Recaro seats, high performance Brembo brakes (now standard on the XKR) and a package of interior details with sporty aluminium or leather finishes. A handling package that uprates suspension and steering is available on coupe models only.

"More than ever, the XK represents the art of performance and remains the epitome of Jaguar luxury sports car values." Lawrence Thomas, XK Brand Manager

"The underlying character of the XK can still be defined in four words: powerful, original, sensuous and exciting. It continues to offer a unique combination of style and performance and emotional involvement that appeals strongly to very discerning customers." Lawrence Thomas, XK Brand Manager

The XK has always had all the ingredients it needed to be very special. When the original XK8 was unveiled in 1996, this elegant high performance sports car set new standards in the luxury sporting market. Succeeding the venerable XJS, the front-engined, rear-drive XK8 was Jaguar’s first new sports car for a generation. It set new records for Jaguar in terms of the time taken to bring a new model-programme to market, and achieved new levels of quality and functionality. The XK8 also set sales records, rapidly becoming the fastest selling sports car in Jaguar’s history, and in doing so won numerous awards around the world.

In 1998, an even more dramatic model was unveiled – the supercharged XKR. With still more impressive performance, the R added another dimension to the XK story. Two very special editions followed, with the Silverstone celebrating Jaguar’s entry into Formula 1, in 2000, while in 2001 the XKR 100 celebrated the centenary of the birth of Jaguar founder Sir William Lyons. By then the XK had become an icon and to date, sales have exceeded 70,000 worldwide.

A Strong, Balanced Character That Appeals To Discriminating Buyers

The XK’s unique appeal is rooted in the balance it provides between styling, luxury, comfort and refinement, together with high levels of performance backed by superb driving dynamics. Beyond that, it is also much admired for the tangible craftsmanship evident in the car, and the contemporary use of traditional trim materials. These attributes are taken to new heights in the 2003 model year XK.

Performance with luxury – the winning combination

The XK has established a niche for itself as the sporting car of choice for an enthusiastic market of successful, style-conscious individuals who have worked hard to achieve their rewards and are still young enough to enjoy them. Typically, XK buyers desire a car with real performance and involving driving dynamics, but are mature enough to demand considerable luxury, refinement and a ‘grown-up’ character. Jaguar research reveals them to be very interested in the latest technology, particularly when it enhances the driving experience.

With the naturally aspirated XK8 now drawing on 300bhp (DIN) and the supercharged XKR having up to 400bhp (DIN) available, the performance credentials of the XK are even stronger. A maximum speed (electronically limited) of 155mph is arguably less impressive than the acceleration on offer. In coupe form, the XK8 is capable of 0-60mph in 6.1 seconds, while the supercharged XKR can achieve this sprint in just 5.2 seconds. With more power and torque than their predecessors and the added benefit of six ratios instead of five in the automatic transmission, all new-generation XK models deliver livelier – and yet effortless – performance.

In conjunction with this, the XK offers the taut ride and handling and precise steering that are essential in a sports car. Every version also has powerful ventilated disc brakes all round, while the new XKR adopts even more impressive, race-developed Brembo brakes as standard equipment.

In short, the latest XK is truly engineered to perform.

Powertrain New Engines And Transmission Transform The XK – From Superb To Even Better!

The adoption of all-new powertrains is the biggest change in the new-generation XK. The latest 4.2-litre AJ34 version of Jaguar’s outstanding AJ-V8 engine is coupled to an industry-leading six-speed automatic transmission. Driving through a rear axle with a new differential that is fine-tuned to maximise the power and torque characteristics of the new engine, the result is an exceptional powertrain.

Both engine and transmission are very similar to those recently introduced in the S-TYPE range, but have been specifically engineered for use in the XK.

This is a 19-year+ news article, from our Jaguar archive, which dates back to the year 2000.

If in doubt check with your local Jaguar dealer as car prices and technical data will have changed since 2002.