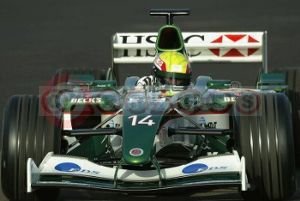 The Jaguar Racing team today unveiled its 2003 challenger, the Jaguar R4. Building on lessons learned in 2002 (with R3), this season’s challenger is more of a conventional and less adventurous design than last year’s. The R4 project was led by Dave Pitchforth (Managing Director, Jaguar Racing) and designed by Ben Agathangelou (Head of Aerodynamics), Rob Taylor (Head of Vehicle Design) and Dr. Mark Gillan (Head of Vehicle Performance).

David Pitchforth explains the philosophy behind R4: “We learned an awful lot of lessons last season from the R3 and even though we began the season with a less than satisfactory race car, we actually finished the season with a sound platform that has benefited some areas on R4. With that in mind, we have not taken a radical approach to R4. Some would say that we have gone back to basics but overall, we have opted for a conventional, low risk and robust design with the aim being to show lineage to the successful modifications to the R3 and best engineering practice.”

“We focused on absolutely everything to ensure that we contest the season with a race car that is capable of being competitive and finishing races reliably. It sounds obvious, I know, but that’s not how Jaguar Racing began last season and by the time we had worked out the problems with R3, most of the season had passed us by,” added Pitchforth. “For this season, we have targeted maximum and continuous aerodynamic downforce development and efficiency whilst maintaining the balance capability of the package. Ben Agathangelou has undertaken some very diligent work in this area and the benefits of our own windtunnel are paying dividends. Ben’s experience and process-led approach has helped us generate a significantly clearer path towards our end target on downforce – something that is on-going throughout the season. It is fair to say however, that we didn’t extract the maximum from the Michelin rubber last year and given the competitive edge that tyres have to offer in this business, we have worked very closely with Michelin to better understand the issues we needed to address on R4.”

The Jaguar R4 will benefit from the brand new Cosworth CR-5 V10 engine in 2003. It is the first time Cosworth has raced with a 90-degree engine layout and the key benefit as opposed to a 72-degree engine is improving the centre of gravity. As the most successful engine builder in Formula One history, Cosworth Racing will continue to develop the CR-5 V10 engine over the course of the season. Nick Hayes, Managing Director at Cosworth Racing takes up the engine story: “The reason we’ve gone to 90 degrees for 2003 is in the interests of improving the centre of gravity (C of G) – and I have to say we’ve achieved a very significant step for 2003 in terms of lowering the C of G. And not all of that improvement has come about via the wider V angle, either. Rob White [chief engineer, Cosworth Racing] and his team have done a fabulous job – a lot of good, clever design – in repositioning various items in order to help lower the C of G, to be honest. But that’s normal; every time we design a new engine, we look very hard at the V angle – because, by and large, the wider you make the V angle, the lower you make the centre of gravity; and the lower you make the centre of gravity, the better you make the car’s dynamics.”

“I’m not going to quote precise figures for CR-5, but I can tell you that it’s the highest-revving engine Cosworth Racing has ever built,” added Hayes. High rpm is a good thing for the simple reason that it gives you more bangs per minute – which in turn provides more power; more top-end power, that is. But, again, it’s a question of compromise – because sky-high rpm figures can have a detrimental effect on reliability. There are mechanical limits to components like pistons and connecting rods, too; there’s a limit to how fast they can be made to function reliably. And there might be problems with combustion. Valve gear, too. So, as I say, it’s a compromise.”

The Jaguar R4 was straight-line tested last week Friday at Ford Motor Company’s Proving Ground in Lommel, Belgium and will today run for the first time on a Grand Prix circuit at the Circuit de Catalunya (Barcelona, Spain).

Jaguar Racing would finally like to take this opportunity to pay tribute to its loyal and steadfast sponsors, HSBC, AT&T, Beck’s, EDS, Michelin, DuPont, Castrol, HP and all our suppliers who have remained with us through difficult times and who are supporting us as we go forward into the new season.