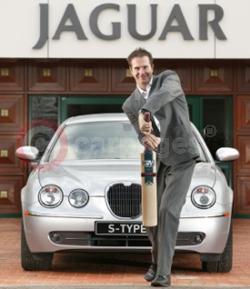 Vaughan, who led the England team to an historic Test victory against the West Indies last Sunday, will be one of the first to take the keys to a new 2004 Jaguar S-TYPE 4.2 Sport when it goes on sale next month in the UK.

Before flying out to the Caribbean for the first of four tests, England's opening batsman took an early test drive of his new car at Jaguar's Browns Lane plant. "Jaguar represents the best of British for me," said Vaughan. "Jaguars are stylish, prestigious, refined and great fun to drive."

Jaguar's UK Marketing Director, Ian Major, added: "We are delighted to be associated with sporting excellence. Michael has established himself not only as a great England captain, but also as one of the best batsmen in the world.

"The famous Jaguar logo will also appear on Michael's bat for this season – we hope it will bring luck to him and his team mates on the West Indies tour."

Sales of the S-TYPE are now heading past 200,000 worldwide since launch, and recent research shows that awareness of the S-TYPE is higher in 2004 than it has ever been.

The car has been revised for 2004 with new looks, enhanced performance and the broader range of trim and equipment choices offers everything that makes a Jaguar stand out from the crowd, combining original, distinctive style with sporting luxury in a car designed to thrill.

The range of petrol engine choices begins with Jaguar’s refined and efficient all-aluminium 2.5 and 3.0 litre V6s and also includes both naturally aspirated and supercharged versions of the 4.2 litre V8 – Jaguar’s most powerful series production engine. The line-up will shortly be extended by the addition of an all-new diesel model that is available to order from April.

This is a 17-year+ news article, from our Jaguar archive, which dates back to the year 2000.

If in doubt check with your local Jaguar dealer as car prices and technical data will have changed since 2004.

Jaguar S-TYPE Images may not be UK specification cars. Colours and exterior and/or interior elements may differ from actual models.