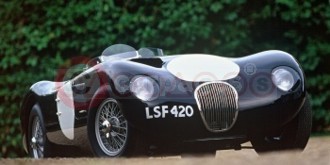 The 1953 Le Mans-winning works Jaguar C-Type, driven to victory by Duncan Hamilton and Tony Rolt, is set to return to the world-famous circuit on Sunday, June 15, where it will be paraded by Duncan’s grandson, Dominic.

This special appearance celebrates the 50th anniversary of the legendary victory for the marque, when the C-Type hit the record books as the first car to exceed 100 mph in the history of the world’s premier endurance race. The winning C-Type was also the first car to feature Dunlop disc brakes and covered 2,534 miles at an average speed of 105.85 mph. Jaguars finished in second, fourth and ninth places, with the entire works entry intact.

Described in 1953 as ‘the greatest Le Mans victory of all time’, the record-breaking win was achieved by Duncan Hamilton (1920–1994) and Tony Rolt (born 1918). Both were distinguished racing drivers in numerous motorsport formulae.

Hamilton was a larger than life character whose immense spirit, vigour and sense of purpose is graphically illustrated in his hilarious autobiography ‘Touch Wood!’, recently edited and extended by celebrated motor racing historian, Doug Nye. He gained further worldwide recognition as a market-leading dealer of thoroughbred historic competition cars.

Rolt distinguished himself by attempting to escape from Colditz during World War II. He went on to develop the Ferguson four-wheel drive system that laid the foundations of 4x4 road cars today.

Duncan Hamilton’s son, Adrian, acquired the C-Type from the Briggs Cunningham Museum in the United States in 1984. Since then the car has received a full restoration by DK Engineering and appeared at a number of international historic racing events including: the Le Mans Classic, where it won its class with Sir Stirling Moss at the wheel, and the Goodwood Revival meeting, where the C-Type has twice won the Freddy March Memorial Trophy in the hands of Gary Pearson.

John Maries, Executive Director of the Jaguar Daimler Heritage Trust said: "Jaguar’s success at Le Mans in 1953 set a cornerstone for the brand. I think it is a great honour for Jaguar and the Jaguar Daimler Heritage Trust that the winning works C-Type will be returning to Le Mans this year, to mark the 50th anniversary of Hamilton and Rolt’s victory. I am grateful to the Hamilton family for preserving this car and making it available for Le Mans this year."