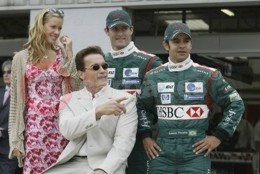 In a unique partnership between Columbia TriStar Films UK and Jaguar Racing, Arnold Schwarzenegger will be the guest of honour at this event where the home team's F1 cars will race in front of a global audience of millions carrying a specially designed TERMINATOR 3 livery. The team’s pit-lane garage will also boast the unique livery that has been designed as a one-off for the British Grand Prix. To coincide with the movie’s premiere on Monday 21st July, Mark Webber will drive the Jaguar R4 through London’s Leicester Square and co-star Kristanna Loken will arrive in an all aluminium polished Jaguar XJ – the only one of it’s kind in the world.

Following a photo call in the pitlane at 11.45am with co-star Kristanna Loken and the Jaguar Racing drivers Mark Webber and Antonio Pizzonia, Arnold and Kristanna will walk the grid before the start of the 2003 British Grand Prix.

Schwarzenegger, a huge sports fan, stated, “I am very excited to be returning to London to attend the UK premiere of TERMINATOR 3: RISE OF THE MACHINES. I am also delighted to attend the British Grand Prix as a guest of Jaguar Racing which, like the film itself promises to be pure action!”

After opening #1 in the U.S. on July 2, "TERMINATOR 3: RISE OF THE MACHINES," has gone on to break records and post number-one openings in 13 international markets, with many yet to come over the next few weeks.

The T3-branded Jaguars will hit the Silverstone track for the first time at 0830am on Friday this week for the two-hour free testing session.

“We are honoured and delighted to be hosting Arnold and Kristanna at our home event and one which will take on a very different look this year with our uniquely branded T3 racing cars,” said David Pitchforth, Managing Director, Jaguar Racing. “The first two Terminator movies have amassed a huge global following and like Formula One, I’m sure the third Terminator instalment from Arnold will pack a big punch when it comes to action, glamour and global adulation. We are very excited indeed about having such an iconic figure in our presence this weekend and running our F1 car through Leicester Square the following night takes the excitement to a whole new audience,” added Dave.

TERMINATOR 3: RISE OF THE MACHINES Opens Across The UK On 1st August 2003.