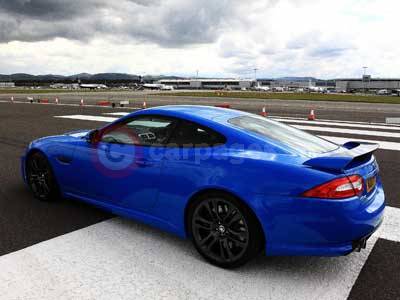 The Race the Runway charity event, organised by the Prince and Princess of Wales Hospice played host to the Scottish debut of the Jaguar XKR-S.

The event, held at Edinburgh Airport, saw 32 cars compete in drag races along a 1800 metre runway. The Jaguar XKR-S made it through to the semi final, where it was outpaced by cars priced over double that of the £97,000 XKR-S.

The Race the Runway's third year saw a record number of entries and has raised over £40,000 for The Prince & Princess of Wales Hospice and other co-nominated charities. Alongside the Jaguar XKR-S was the Jaguar XKR, XFR which also made its Scottish debut.

Ashley Kilgour, Corporate Fundraiser, The Prince & Princess of Wales Hospice commented: "We're delighted that Jaguar supported the Race the Runway event this year and our thanks go to them. The event raised a combined total of over £11,000 this year for The Prince & Princess of Wales Hospice and the Scottish Burned Children's Club which will make a valuable difference. I was fortunate enough to passenger in the XKR-S and what a thrill it was. It's not every day you achieve 165 mph in a brand new Jaguar on an airport runway!"