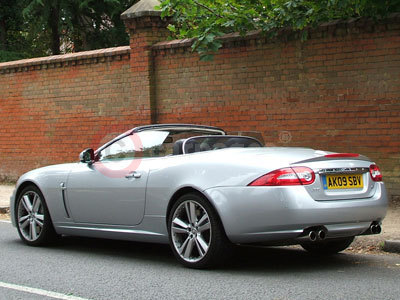 Now, as a Grand Tourer, people are clearly expected to travel light. Even with the roof up the luggage capacity of the Jaguar XKR is only 313-litres and because most of the boot is taken up by the space-saver, spare wheel, the remainder would be hard pushed to contain a decent-sized suitcase and I would imagine that a golf bag would be out of the question. But then there are alternatives.

The Jaguar XKR is a 2+2, meaning that the two rear bucket seats are only suitable for very small children and during the test tended to be used as a shelf, which seems a waste as they were beautifully upholstered in black leather.

The front seats are extremely comfortable with no less than five buttons in a panel set into the two doors allowing for 16-way adjustment, including moving the side bolsters for a snug fit. Along with this there are three memory buttons for individual seat, door mirror and steering wheel combinations and the seats also have heating or cooling functions.

The Jaguar XKR's fascia, doors, heated steering wheel and central armrest are all covered in the same fine leather with a soft inner layer for extra sumptuousness. On all Jaguar XK models, the centre console houses a 7-inch touch screen, through which adjustments can be made for the car, audio, climate controls, Bluetooth and, of course the satellite navigation.

It also provides a graphic for the front and rear parking aids, although there is no rear view camera. The Jaguar XKR test car did include some optional extras one of which was the DAB radio in place of the standard system. Speaking of standard, the audio system comprises a 6-CD changer in the dashboard, a Portable Audio Interface, WMA and MP3 compatibility, the sound quality of which are made even better by a Bowers & Wilkins 525W sound system.

The central tunnel, between the front seats had a smart piano-black finish and elsewhere there were touches of Dark Mesh aluminium. Set into the panel between the seats is the JaguarDrive Selector. This was first used in the Jaguar XF and now makes its debut in the Jaguar XK.

The Jaguar Drive Selector is a rotary knob that rises serenely out of the tunnel-mounted panel when the pulsing engine start button is pushed. It controls the 6-speed, automatic transmission functions simply and easily by simply turning to the desired position; P, R, N, D and a push twist for S. There are shift paddles, which can be used at any time and to make it easier, they move with the steering wheel. Moreover, the drive selector automatically returns to Park when the engine is switched off and the automatic Parking Brake comes on.

Just behind the rotary switch, are buttons for the Dynamic Stability Control and Adaptive Dynamics amongst others. This latter is a replacement for the acclaimed Computer Active Technology Suspension. Where CATS had only two damper settings; firm and soft, the new Adaptive Damping System offers a continuously variable ride quality depending on the circumstances and it shows.