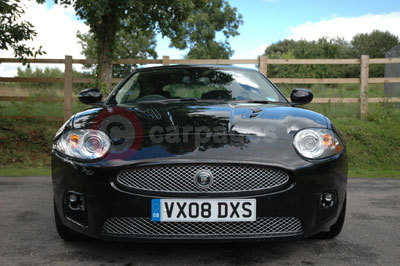 In 1948, Jaguar created what would become one of the most famous automotive names in the world, as the all-new and highly advanced XK engine made its debut in the revered XK120 sports car. In 1949 the XK120 justified its name, by topping 120mph in an official record run on the Jabbeke motorway in Belgium. Not only was it the fastest sports car of its day, it also started a golden era for Jaguar in sports car racing.

In 1996 Jaguar resurrected the XK name with the XK8 range, in 2006 a new model was introduced and as with the XJ saloon the body is constructed from advanced lightweight aluminium.

Last year we tested the normally aspirated XK, this year we drove a 2009 model Jaguar XJR. Thankfully Jaguar has removed the radio aerial for the 2009 model; it was a hideous addition to what is one of the world’s most beautiful cars.

The Jaguar XKR uses a supercharged version of Jaguar’s 4.2-litre AJ-V8 engine which produces 420 bhp at 6250 rpm and 560Nm of torque at 4000 rpm. This compares to the non-supercharged car which produces 300 bhp at 6000 rpm and develops maximum torque of 420Nm at 4,100rpm. Although the XK and XKR share a 4.2 litre engine the addition of the supercharger and twin air intakes means that the new XKR benefits from a 120 bhp power increase over the normally aspirated 4.2-litre XK, which results in instant acceleration at any engine speed and torque also increases significantly by 36% over the standard XK. The overall weight of the XKR is increased by just 70kg, consequently the power-to-weight ratio compared to the normally aspirated 4.2-litre XK is an impressive 34% higher.

Being introduced in 1996 the AJ-V8 engine is a little dated but it is rather good and apart from fuel economy we are not too sure what could be improved, it effortlessly delivers the power with so much enthusiasm.

Jaguar quote a 0-60 mph figure of 4.9 seconds, which is pretty quick by anyone’s standards, but is not until you accelerate from 50-70mph in just 2.5 seconds that you feel the pure surge of power and the adrenaline rush that accompanies it. The top speed is electronically limited to 155 mph; if you should want to go faster you need to hunt down the limited edition Jaguar XKR-S  (production limited to 200 models) which governed to 175 mph.