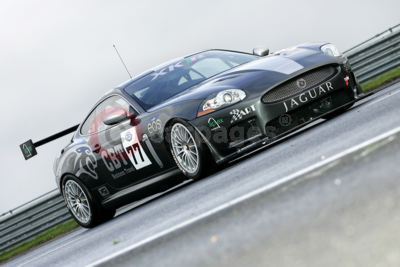 Jaguar's new XKR Coupé is being revealed to a new audience today at the Autosport International Show at the NEC, Birmingham, and in a new guise.

Buckingham-based Apex Motorsport, under the direction of Richard Lloyd, has developed the stunning XKR model for use in the FIA GT3 European Championship.  It is being revealed in the 'flesh' for the first time to the world's motorsport media at what is recognised to be globally one of the biggest and most successful motorsport shows.

Lloyd and Apex have enjoyed huge racing success in the past, most recently with Bentley with whom they won the 2003 24 Hours of Le Mans.  "It was obvious to us that the Jaguar name was missing from the list of GT3 contenders," said Lloyd.  "We believe the new XKR has great potential for success, and Team Manager Dave Ward and the guys have been working flat out since receiving our first car at the end of September.  We've still got a mountain to climb with roll out and first test scheduled to take place within the next five weeks and, of course, the first race of the season at Silverstone in May.  The first car is sold and we have received very positive interest for another two so we're confident there will be plenty of Jaguars in the FIA paddock and in other emerging GT3 series around the world."

While Apex has Jaguar's blessing to compete with the XKR GT3, this is not a factory motorsport programme and the Apex race activities are independent of Jaguar.  At the time of the programme's announcement in September, Stuart Dyble, Jaguar Board Director and Vice President, Communications and Public Affairs, Premier Automotive Group and Ford of Europe, said, "We welcome this initiative which will result in production Jaguar sportscars being seen once again on race circuits across Europe.  We have just launched the all new Jaguar XKR road car, and GT3 is the natural race series in which to compete."

The Jaguar XKR GT3, featuring a 4.2 litre V8 supercharged engine, retains the aluminium body of its production cousin, but has had modifications made in line with the regulations. The definitive technical specification will be revealed following the official FIA track tests, the first of which takes place at Monza on February 22/23.

The first car to be built by Apex Motorsport has already been sold to Stuart Scott, Managing Director of East Anglia's most successful travel management company, Cambridge Business Travel.  Scott, who has most recently been racing in the British GT Cup, will be driving the Jaguar in a programme of six events with a yet-to-be-named co-driver.  He said of his involvement, "I feel privileged to be here at the beginning of this project.  In my racing past I have always tried to do something that's a 'first' or a bit different, and to take delivery of the first XKR race car is a dream come true.  I've been aware of Richard and Apex for a long time and to now be part of such a professional team is wonderful."

The FIA GT3 European Championship is already a very marketable racing series for teams and manufacturers, using sexy coupés that are closer to their road-car origins and therefore less expensive to build and to run.  The series captured the imaginations and interest of competitors and fans alike in its inaugural 2006 season with some 40 entries, and looks set to be strengthened further with the addition of Jaguars to the starting line up.  Each manufacturer is represented by up to six entries ensuring a fair distribution of honours, and the performance between the different marques is balanced by the use of success penalties.  Entry is aimed at gentlemen and non professional drivers graded by the FIA via a combination of racing experience and age.

The five round Championship begins in May at Silverstone, then travels to Bucharest (ROM), Monza (I) and Brno (CZ) in Europe before finishing in Dubai in November. Some owners may also plan on entering the non Championship GT3 race within the Spa 24 Hours event in Belgium at the end of July.