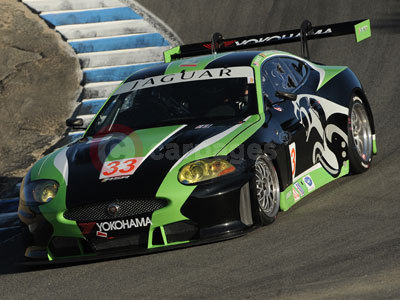 The new JaguarRSR XKR GT racing car makes its European debut this week at the 2010 Autosport International at the NEC in Birmingham, UK. It is the first and only chance for the public to see the stunning new Jaguar XKR GT in the metal before it heads back to the US to compete in the entire 2010 American Le Mans Series (ALMS) in North America.

GT racing legend Paul Gentilozzi is taking a break from a gruelling development programme to feature the Jaguar XKR in the largest dedicated trade motorsport exhibition in Europe. The racecar will be on display at the Jaguar stand alongside a production model Jaguar XKR, Jaguar XFR, and the fastest Jaguar ever - the Bonneville XFR prototype, which Paul drove to 225.675 mph on the Bonneville Salt Flats in 2008.

Jaguar asked the Michigan-based RSR team to help create a race car to compete in GT2 racing in 2010. The Jaguar engineering and design teams, based in Coventry, have jointly developed the car from a standard road-going XKR with the RSR team.

Paul Gentilozzi, Principal Partner JaguarRSR said: "Jaguar is so intertwined with British motoring history making this a fantastic opportunity to debut the JaguarRSR XKR GT racecar internationally. Having our new GT racecar and the Bonneville prototype XFR on display at the biggest motorsport exhibition in Europe with the production cars that made these possible is such a great way to showcase our dedication to the Jaguar brand and to motorsports."

Before taking stage at the car show, the JaguarRSR XKR GT visited 'home' by making stops at Jaguar headquarter sites in Whitley and Castle Bromwich in the UK. "It was incredibly exciting to take the JaguarRSR XKR GT back to the team at Jaguar who worked so hard to make this dream a reality," added Gentilozzi. "A picture may be worth a thousand words, but seeing this car in person is priceless."

The competition car uses the standard Jaguar XKR lightweight aluminium monocoque together with additional steel reinforcements and safety structure developed by RSR. The 5.0-litre V-8 engine boasts 550 horsepower at 7000 rpm and a maximum speed of 180mph.

The RSR Jaguar XKR GT made its racing debut during the Petit Le Mans event at Road Atlanta in Braselton, Georgia, in September 2009. The car took its first green flag in the American Le Mans Series season finale at Mazda Raceway Laguna Seca in October and is set for a full-season championship effort in 2010.

Mike O'Driscoll, Managing Director of Jaguar Cars said: "Our designers and engineers have taken the best of our standard road-going XKR and with Paul Gentilozzi's motorsport expertise created a first-class competition car. Paul and his RSR team are confident that they can compete against some serious competition in the American Le Mans Series (ALMS).

"Motorsport has always been important to the Jaguar brand. Our domination of Le Mans in the 1950s was a foundation on which the company was developed. As we look to the future with our new range of high performance 'R' branded cars, we aim to make the Jaguar brand synonymous with motorsports once again."

RSR Principle Partner Paul Gentilozzi will be in attendance at Autosport International. Aside from his role as team owner, Paul is one of the drivers for the #33 JaguarRSR XKR. Meanwhile, the RSR crew will stay busy with various projects despite the absence of the #33 car as they continue to prepare for the ALMS Winter Test 22nd to 23rd February 2010 at Sebring International Raceway in Sebring, Florida and Season Opener - the 12 Hours of Sebring, 20th March 2010.