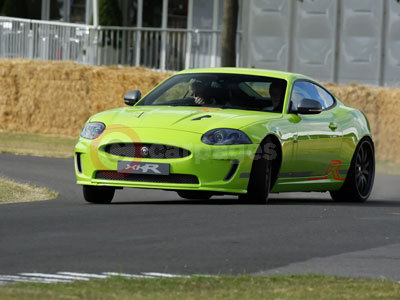 Wing Commander Andy Green OBE - the fastest man on earth and the World Land Speed Record Holder - drove up Goodwood's famous hill in Jaguar's fastest car ever, the XFR Prototype that recorded 225.675mph on the Bonneville Salt Flats towards the end of last year.

Andy Green was the first person to break the sound barrier on land when he recorded 763.035mph in the Thrust SSC in 1997. He said: "It is always a thrill to drive at the Festival of Speed and all the more so in a 'proper' race car. I hugely enjoyed the Bonneville Jaguar, and the crowd loved it too - this is the sort of car that they come to watch. Now I want to go and drive it at Bonneville!"

Rocketsports Racing owner, Paul Gentilozzi, was behind the wheel when the car made its record-breaking run in Utah, so it was fitting when he attended Goodwood over the weekend to drive the car up the hill in the First Glance run throughout Friday and Saturday.

Paul Gentilozzi said: "During my career, I've raced worldwide from the southern tip of New Zealand to Le Mans. Along the way, I have been privileged to drive and own so many exciting cars but I've never driven one that was as exciting to drive fast as this Jaguar."

Rocketsports Racing officially announced in April 2009 a GT2 program for the American Le Mans Series that will see the East Lansing, Michigan-based team reunite with the Jaguar brand by entering a Jaguar XKR for a partial season in 2009 with a full-season championship effort in 2010.

Jaguar also showcased a unique XKR in the supercar run at Goodwood, driven by Mike Cross, Jaguar's Chief Engineer of Vehicle Integrity. Developed to explore the harder side of the Jaguar XKR's character and unfettered by the requirements of a road car, the engine torque and power were both significantly increased to continue the Jaguar tradition of special cars for Goodwood.

The standard Jaguar XKR features a new 5.0-litre V8 supercharged engine which has significantly enhanced the sporting character of the car. This special Goodwood Jaguar XKR's engine torque was increased from 625Nm to 700Nm and with power up from 510PS to 530PS, it will accelerate from 0-60mph in around 4.2 seconds.

Jaguar's NVH team also developed a great sounding exhaust which was louder and crisper, building on the already strong exhaust sound of the standard car. Fitted with 21-inch wheels and a lowered ride-height, the XKR had a one-off lime green paint scheme with satin graphite detailing to the front grilles, headlights, door mirrors, side window surrounds, rear signature blade and bonnet louvers. The car also featured a unique graphic on the side and bonnet of the car proudly stating that it is a Jaguar XKR.