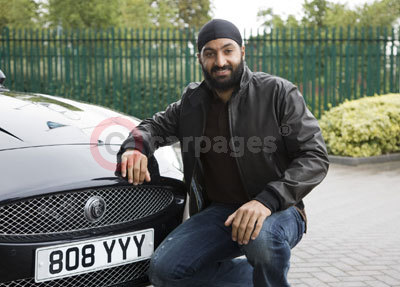 Monty Panesar and his Jaguar XKR

Monty Panesar – the England cricket team's most prized spinner - yesterday became a brand ambassador for Jaguar when he collected his new XKR sports car from the Castle Bromwich plant in Birmingham.

David Steele, Jaguar's UK Marketing Director said: "We are delighted to be associated with Monty - he has established himself as a great ambassador for British sport making him the perfect match for a British brand. I am sure he will thoroughly enjoy driving his new XKR."

Commenting on the partnership, Monty said: "I’m really excited about working with Jaguar.  I’ve always loved Jaguars because of their image and heritage, but I chose the XKR because, to me, it has everything. It’s the perfect sports car, it looks sexy and is amazing to drive."

Monty initially attracted media attention when he became the first Sikh to play for England. He quickly established himself as a national hero following a series-winning display against Pakistan in 2006. In addition to his vital role in the England team, Monty plays cricket for Northamptonshire and has recently agreed a new two-year contract that will tie him to the county until the end of the 2010 season.

As part of the partnership, Jaguar is helping Monty to support his favourite charity 'Movers and Shakers' – The Cure Parkinson's fundraising trust - by hosting a private dinner with the sports star which will be auctioned to raise funds.