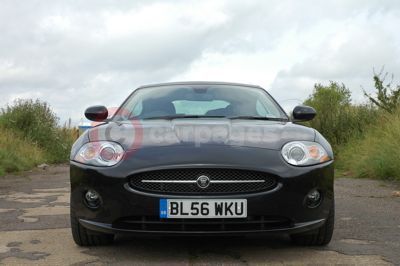 In early 2006 the new Jaguar XK superseded the XK8 which we first saw 1996 and like the XK8, the XK is available in two body variants, a coupe and a convertible. Similarly there are two engine choices, either a naturally aspirated V8 or a supercharged variant.

At Jaguar, XK has always stood for sports car and for Jaguar, sports cars have always been used to push technology forwards. The badge first appeared on the XK120, unveiled at the London Motor Show in 1948. Like the new XK, the very first XK120s had aluminium bodywork and although the production models reverted to steel bodies, they still had abundant performance - mainly thanks to the first appearance in production of the classic Jaguar six-cylinder, twin-cam XK engine and retention of lightweight aluminium closure panels. In 1949 the XK120 justified its name, by topping 120mph in an official record run on the Jabbeke motorway in Belgium. Not only was it the fastest sports car of its day, it also started a golden era for Jaguar in sports car racing.

When the next XK, the XK8, appeared, in 1996, it reflected the times. It was a very different kind of car more a grand tourer than a classic sports car in the 1950s and 1960s mould, but every inch a Jaguar, and destined to be the fastest selling sports car in Jaguar history.

Now, the all-new XK takes the Jaguar sports car line to another level. It is lighter, faster and better equipped than the model it replaces, with substantial improvements in performance, handling dynamics, braking distances, safety and economy. In looks it pays homage to the legendary Jaguars of the past - the front grille, for example, is a clear evolution of the classic front ends seen on the D and E-TYPE.

How It Drove - Performance There are two engine variants in the Jaguar XK line up, a naturally aspirated or a supercharged 4.2 litre (4196cc) V8 engine. We drove the naturally aspirated Jaguar XK which produces 300bhp at 6000 rpm and develops maximum torque of 303 lb ft at 4,100rpm. The engine is built at the Bridgend engine plant in Wales; we have seen variants of the AJ-V8 engine since 1996 in previous Jaguar’s, including the outgoing XK8. It is a well tested engine but at 11 years of age we feel that it is out paced and under powered by BMW and Audi's latest offerings.
Jaguar XK Review | Part Two