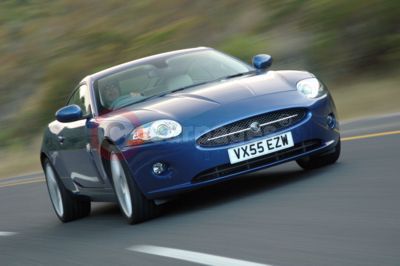 Jaguar's much sought after new XK sports car has claimed the prestigious 'Car of the Year' award at the 2006 Auto Express New Car Honours, announced today. The XK Coupe also came out on top in the 'Best Coupe' category, ahead of the BMW 6 Series and the Porsche 911.

Geoff Cousins, UK Managing Director at Jaguar Cars, commented: "We are delighted that Auto Express shares our view that the new Jaguar XK is very special. At the outset Jaguar's aim was to deliver a sporting Grand Tourer that on the one hand cossets the driver and on the other offers an involving and rewarding experience - the true heart and soul of a sports car. For those who have had the pleasure to experience the new XK, I am sure they will agree that we achieved just that.

The launch of the new XK earlier this year marked the beginning of an exciting era for Jaguar in terms of design and engineering, and reinforces the marque's reputation for building beautiful, fast cars that are as thrilling to drive as they are gorgeous to look at.

David Johns, Editor-in-Chief at Auto Express said: "From the moment we first heard rumours about the new Jaguar XK we were excited. When the first pictures appeared we were hooked and early passenger rides in prototypes merely served to heighten our anticipation.

"It was only when we drove Coventry’s cat back to back against rivals on UK roads that we realised what an astonishing achievement this car really is. The driving experience matches your mood – soothing for a long drive home after work, invigorating for a weekend blast.

"What’s more it proves Britain still has the expertise, experience and ability to produce world-beaters. Ground-breaking, bold, beguiling and breathtaking, the Jaguar XK is a British sports car that we can all be proud of."

Geoff Cousins added: " To win two awards from the UK's biggest selling weekly car magazine, Auto Express, is a great honour for us, but to win the top award of the evening – 'Car of the Year' – is fantastic. This is the most significant award Jaguar has ever won at this event and is testament to just how good the new XK really is."

Latest sales results prove that customers feel the same too. So far this year more than 1,000 UK customers have taken delivery of the new XK – an increase of 74% year on year. Globally, Jaguar has already sold more than 8,000 XK's, with the order bank still growing.

Jaguar has also just announced that a new supercharged version, the XKR, will make its global debut in the UK at the British International Motor Show, which opens at the ExCeL Centre in London's Docklands on Tuesday 18 July.

This eagerly awaited new GT sports car will continue to build on the momentum the XK has generated for Jaguar dealers and will be produced at the company's state of the art Castle Bromwich manufacturing centre in Birmingham alongside production of the XK.

The ever-growing popularity of the XK is not only due to the assertive good looks created by Jaguar's Design Director Ian Callum, but also that the 4.2 litre sports car is undoubtedly the most technologically advanced Jaguar ever built.

Made up of an industry-leading bonded and riveted aluminium monocoque body structure with a chassis that is very safe and very light, the XK produces outstanding performance, handling, safety and economy. The coupe is in fact, best-in-class for torsional rigidity and is lighter than its rivals – all attributes that help to create that much talked about exhilarating driving experience. The XK sounds great too, the 4.2 litre V8 engines really growls when the engine is started up, and sounds like a real sports car when under acceleration.

The XK has already picked up other notable awards since its launch this year, one of which was the 'Most exciting car to be launched in 2006' awarded by What Car? magazine. Others were in recognition of exceptional safety features on the car: the Prince Michael Award for Safety and the World Traffic Safety Symposium's Traffic Safety Achievement Award in the Automaker category.

These awards were due in large part to the XK’s Pyrotechnic Deployable Bonnet System - an all-new, industry-leading safety feature which was created to meet Phase One of the new European safety legislation. In the unfortunate event of a pedestrian impact, the deployable bonnet on the new XK automatically ‘pops’ up a few inches, to increase space between the engine and the bonnet. This helps to isolate the pedestrian from hard points in the engine compartment - and takes place in less than a tenth of the time it takes to blink an eye.