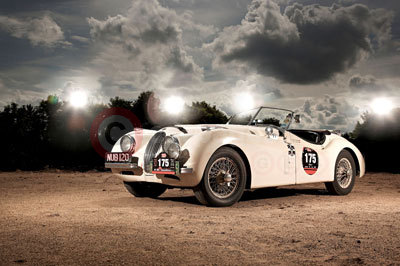 Jaguar will this weekend be celebrating 60 years of the iconic XK nameplate as a collection of models from the 1950s to present day take to the hill at the Goodwood Festival of Speed.

Running up the famous hill will be the recently introduced XKR-S, two XK 120's, the historic 'NUB' and 'LWK' and an XK 140. Also joining this illustrious line up will be the long-nose D-type, famous for winning Le Mans in 1957.

Jaguar's fastest ever production XK – the XKR-S – will grace the Goodwood hill in the supercar run throughout the weekend. This limited edition vehicle is powered by Jaguar's acclaimed 4.2-litre V8 supercharged engine and is capable of 0-60mph in 4.9 seconds and a top speed of 174mph. The XKR-S is for the true Jaguar enthusiast, delivering a combination of high speed performance, dynamic excellence and crafted luxury that is unique to Jaguar.

The record-breaking XK 120 'Montlhéry' Fixed Head Coupe is one of the three 1950s XK's to take part in the 'Classic Endurance Cars' hill climb. This car is famous for its part in the 'Seven Days and Seven Nights' event where it was driven by Stirling Moss, Bert Hadley, Jack Fairman and Leslie Johnson. It averaged 100.31mph (161.43km/h) for seven days and nights covering 16,851 miles.

The fixed head coupe will be joined by 'NUB 120', the XK 120 that is recognised for establishing Jaguar's motor sport credentials. 'NUB 120' was privately owned and campaigned by Ian Appleyard and his wife Patricia, Sir William Lyons' daughter, who acted as navigator. Appleyard entered the 1950 Alpine Rally and won a Coupe des Alpes. In 1951, Appleyard and 'NUB 120' repeated their success in the Alpine Rally and added the RAC Rally and the elusive Tulip Rally to their string of victories. Despite failing to win the Alpine Rally outright in 1952, the car completed the third consecutive run without incurring a single penalty point earning the first ever Gold cup.

The third classic XK to feature on the hill will be a privately owned XK 140 – a private entry at the Le Mans 24-hour race in 1956 by Robbie Walshaw and Peter Bolton. The car was lying in 11th position before the drivers were disqualified after 21 hours, a penalty that was later overturned. Roger Joyce bought and restored the car 30 years ago, but tragically died at Silverstone five years later. His daughter Annabel Beattie is the current owner.

In honour of this year's theme at Goodwood, 'Hawthorn to Hamilton – Britain's love affair with World Motor Sport', the 1957 Le Mans winning long-nose D-type will roar its way up the hallowed hill climb once again. Duncan Hamilton won the Reims 12-hour race in this car in 1956 along with Ivor Bueb and that same year, Mike Hawthorn entered the 1956 24-hour race at Le Mans with Bueb, finishing sixth. Hawthorn and Bueb drove this car again in 1957 at Sebring, finishing third.

Jaguar's Le Mans winning XJR-9 will be on display in the Stableyard as part of Dunlop's motor racing success celebrations. Powered by the Jaguar V12, the XJR-9 took to the Le Mans track in June this year to celebrate 20 years since claiming first, fourth and sixteenth place at the 1988 Le Mans 24 Hour Race whilst running Dunlop tyres.  A current Jaguar XKR coupe will also be part of the Dunlop display in the Stableyard.

Geoff Cousins, UK Managing Director, Jaguar Cars, said: "Goodwood is inimitably British and I believe the ideal location for Jaguar to begin celebrating 60 years of the stunning XK sports car. We are very proud to be showcasing our exciting new model – the XKR-S – alongside a number of historic vehicles that perfectly represent the success of XK and our rich and illustrious heritage."

The Goodwood Festival of Speed is open from 11 – 13 of July 2008. All Jaguar cars will be on display and heading up the famous Goodwood hill climb.