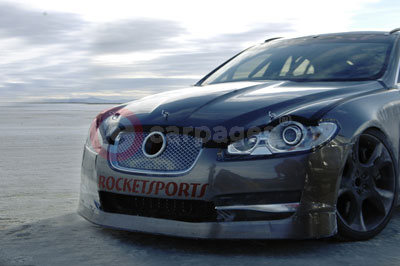 Jaguar has announced that during a secret speed trial at the legendary Bonneville Salt Flats in Utah, an XFR prototype recorded a stunning top speed of 225.675mph (363.188km/h), making it the fastest Jaguar ever.

The Jaguar XFR prototype – powered by the all-new AJ-V8 Gen III engine -; beat Jaguar's previous speed record of 217.1mph (349.4 km/h) set in the XJ220 in 1992. Paul Gentilozzi - the owner of Rocketsports Racing who successfully led the Jaguar XKR to five series victories between 2001 and 2006 in the Trans Am series in the USA - drove the car on the record-breaking run.

Running with minor aerodynamic and safety modifications to meet the requirements for a Bonneville run, the 225mph top speed was achieved with additional horsepower liberated by a remapped ECU, a modified air intake and exhaust system and revised supercharger settings. No internal engine components were changed and the six-speed automatic transmission was standard, including the gear ratios.

"This sharper edge - the quicker steering rack, outstanding grip and stability and improved stopping-power - has been achieved by using advanced Jaguar technologies such as Adaptive Dynamics (the latest in computer-controlled suspension and traction control), a new electronic Active Differential Control and significantly uprated brakes."

Paul Gentilozzi added: "During my career, I've raced worldwide from the southern tip of New Zealand to Le Mans. Along the way, I have been privileged to drive and own so many exciting cars but I've never driven one that was as exciting to drive fast as this Jaguar."

The new Jaguar XFR - the first XF to carry the 'R' badge - defines Jaguar's most performance-focused models. Powered by an all-new supercharged 5.0-litre V8 engine developing 510PS and 625Nm of torque, the Jaguar XFR can accelerate from standstill to 60mph in just 4.7 seconds (0-100kph in 4.9 seconds) and is capable of reaching an electronically limited 155mph. More relevant in everyday driving, an excellent indicator of the Jaguar XFR's great flexibility is the time it takes to accelerate from 50-70mph - just 1.9 seconds.

High-speed runs have become indelibly etched into the history of the Jaguar marque. Next year marks the 60th anniversary of the Jaguar XK120's record-breaking 132.6mph run set on 30th May 1949 on a deserted stretch of motorway near Jabbeke in Belgium.

The new XFR demonstrates Jaguar's commitment to delivering exhilarating performance and outstanding dynamics for the driving enthusiast - the 'Fast' part of the Jaguar ethos of designing, engineering and manufacturing 'Beautiful, Fast Cars'.

Jaguar XFR Images may not be UK specification cars. Colours and exterior and/or interior elements may differ from actual models.