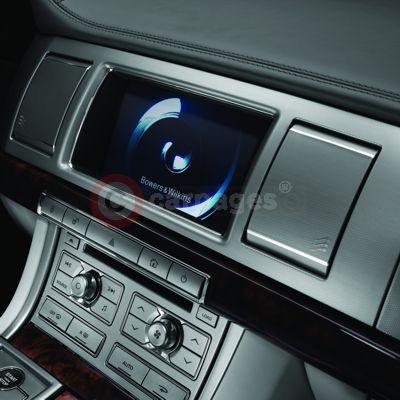 Bowers & Wilkins, the British loudspeaker company with an unsurpassed reputation for innovation and performance, announces the culmination of over three years of intensive development effort: their first premium car audio system to be designed and optimised together with the vehicle it fits.

The Bowers & Wilkins Premium Sound System defines a new paradigm for top-level automotive audio engineering. Conventional ‘premium’ sound systems are compromised by the need to fit into the spaces left for the manufacturer’s standard audio components. For the Jaguar XF project, Bowers & Wilkins specialists worked alongside Jaguar’s own engineers from the early concept stages of the new car’s development. Together, the experts from the two companies sought to optimise every aspect of the car’s audio environment with the single aim of achieving the best audio experience possible in a contemporary luxury car.

Bowers & Wilkins worked with Jaguar to design and specify speaker geometries and positions, advanced sound equalisation settings and even the choice of mounting hardware and the grade of cable used to connect the source, amplifiers and speakers.

The fourteen specially-designed Bowers & Wilkins speakers in the new system make use of the advanced Dolby Pro Logic II 7.1 system to deliver a surround sound experience from any stereo source. The system’s four metal dome tweeters and high-powered rear-mounted subwoofer are complemented by nine individual Kevlar speakers carefully positioned in the car’s interior. Kevlar disperses concentric standing waves through its square weave, which minimises distortion, delivering clearer sound and finer detail. Advanced speaker technology has been a hallmark of Bowers & Wilkins expertise since the company obtained the first patent for the use of the space-age woven fabric in audio systems, and its precise resin and fibre configurations remain a closely guarded secret.

“As with every Bowers & Wilkins product, we constantly refined the speaker designs for the Jaguar XF until we were satisfied that we had achieved a new standard of accuracy and purity in automotive sound reproduction,” says Martin Lindsay, Senior Automotive Business Manager at Bowers & Wilkins. “Once we were satisfied with the speaker components, we placed a Gold Reference sample of each unit into our secure storage facility. Those units then become the standard against which all production units and modifications to the system are judged.”

The same level of dedication and attention to detail went into the tuning of the system too. “Working so closely with Jaguar at the concept stage allowed us to create a fantastic hardware platform in the XF,” says Lindsay. “But the audio environment in a vehicle is extremely dynamic, and it is the optimisation of the delays and responses in individual channels that really gets the best performance out of that platform. The Bowers & Wilkins premium sound system constantly monitors the vehicle’s interior environment and makes adjustment to the amplifier equalisation settings according to road speed. The aim, both in the hardware configuration and the software control, is to deliver optimum sound to every passenger in the vehicle, wherever they are sitting,” says Lindsay.

According to Lindsay, the XF system is the most recent example of Bowers & Wilkins new approach to the development of vehicle audio technology. “Delivering premium sound in a vehicle is complex challenge, relying on the interaction of thousands of different design elements. Collaborating with Jaguar, its suppliers and our own development teams in the UK, we’ve been able to achieve an unprecedented understanding of that complex environment and to deliver a truly outstanding solution.”