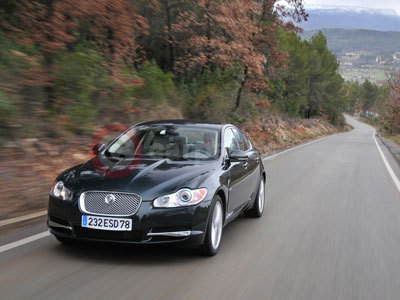 The Jaguar XF has won the award for Best Executive Car at the 2009 Fleet World Honours, proving the growing popularity of Jaguar's new sports saloon amongst the business community. The trophy was presented at a special ceremony held at the Royal Automobile Club, Pall Mall on Wednesday 20th May 2009.

Geoff Cousins, UK Managing Director of Jaguar Cars, said: "We now have a fantastic new 3.0-litre diesel engine which has been critically acclaimed for its looks and superb driving experience. When combining this with strong residual values, competitive pricing and a wide range of standard specification, the XF really is a great product for the corporate customer."

Editor of Fleet World, Ken Rogers, said: "The Jaguar XF is a truly dramatic executive express. Whilst drawing on design cues from Jaguar's illustrious heritage, it is very much a contemporary product with all the style, luxury and performance traditionally expected from the cars bearing the badge of this charismatic marque.

"Ride and handling combine sportiness with refinement - and equipment levels are generous. The Jaguar XF brings traditional British individuality and style to a market segment dominated mainly by products from the German premium manufacturers - and it brings the same aura to the executive slots in the company car park. Increasingly important from the fleet perspective is that residuals are good too."

The equally impressive 240PS version of the new 3.0-litre engine produces 16 per cent more power and a 15 per cent increase in torque over the 2.7-litre diesel, allowing the Jaguar XF to reach 60mph in 6.7 seconds.

These new 3.0-litre diesel engines produce 10 per cent less CO2 than the 2.7-litre, while power has increased by 33 per cent in Diesel S guise. As well as tackling CO2, the new 3.0-litre engines meet the forthcoming EU5 regulations, due to come into force at the start of 2011. And these great performance leaps are achieved with combined average fuel consumption in both models of 42.0mpg - an improvement on the 2.7-litre engine of 12 per cent.

The Jaguar XF has picked up more than 20 international awards from launch, most recently 'Britain's Best Car' in the Auto Express Driver Power Survey for 2009 and 'Best Executive Car' at the What Diesel Awards 2009.