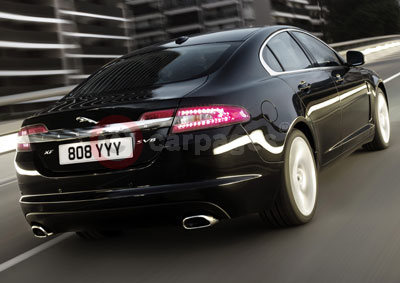 The Jaguar XF has yet again been voted 'Car of the Year' – its fourth top title win since being launched in March 2008. This time the premier award comes courtesy of Auto Express in their New Car Honours 2008.  Jaguar's multi-award winning sports saloon claimed its crown following victory in the 'Best Executive Car' category ahead of the BMW 5 Series, the Mercedes CLS and E-Class, the Audi A6 and the Lexus GS.

Dan Strong, Editor of Auto Express magazine, said: "Jaguar’s XF is a machine that has proved the doubters wrong. It's a car that impresses on every level, from design to drivability, practicality to price.

"But that’s not the only reason why our judges chose this car. Our winner has raised the standards in a class where excellence is considered the norm. It's a home-grown package, designed and developed in the UK and built by a highly-skilled workforce."

Geoff Cousins, UK Managing Director of Jaguar Cars said: "I am absolutely thrilled Auto Express – the UK's biggest selling weekly motoring magazine – has awarded the XF with its top accolade. This has been a fantastic year for Jaguar with the XF leading the success of our revitalisation plan. In July, total Jaguar sales were up 29.2% versus the same month last year and we now have over 7,000 orders for XF in the UK and more than 22,000 worldwide - we couldn't be more pleased with the reaction it has received."

Most recently, the optional top-of-the-range 440 watt Bowers & Wilkins in-car audio system in the Jaguar XF was voted Best Buy under £100,000 by The What Hi-Fi? Sound and Vision Ultimate Guide to High End Entertainment.

Priced from £33,900 for the 2.7-litre diesel, the XF comes as standard with a generous specification featuring a host of innovative, industry-leading equipment.  Highlights include the all-new JaguarDrive Selector™ and JaguarSense™ - a smart technical solution introducing touch or proximity-sensing control for overhead console lights and glovebox.

These highlights have all contributed to the class-leading residual values of the XF. Both CAP and EutotaxGlass's have rated the diesel derivative above its BMW, Mercedes, Lexus and Audi competitors with an RV after 36 months / 36,000 miles of 50% of the original value*.