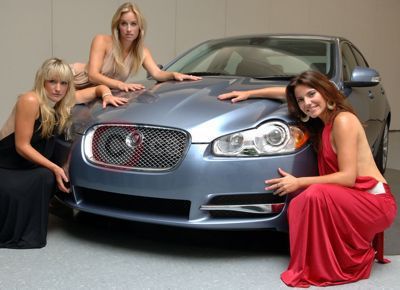 Jaguar's new XF has claimed top prize – the 'Car of the Year' award – at the 2008 What Car? awards in London last night. The XF also took top place in the 'Best Executive Car' category, ahead of the BMW 5 Series and the Mercedes CLS.

Steve Fowler, group editor of What Car?, said: "For us, the XF goes straight in there with the very best cars from Jaguar's past. And given that the car market today is more competitive than it's ever been, it's fair to say the XF is the best car Jaguar has ever built.

"The XF really does have it all – a sensational exterior and dramatic interior combined with a drive that will delight and pamper in equal measure. On top of that, it stacks up as a sensible buying and owning proposition, too."

Mike O'Driscoll, Managing Director of Jaguar Cars, said: "All of us at Jaguar are delighted that we've taken the top spot at these awards, and that What Car? has named the new XF Car of the Year.  It's especially gratifying as What Car? has such a great reputation for representing the British consumer. Jaguar is creating a new generation of cars that started with the XK, and now continues with the all-new XF – a four door, five passenger car that has the heart of a sports car and the looks of a grand tourer.  Like the XK, XF is visually striking and thrilling to drive.

"We're very pleased with the reaction the car has received, and our customer order bank is growing fast.  We're grateful to What Car? for this wonderful award."

Priced from £33,900 for the 2.7-litre diesel, the XF comes as standard with a generous specification featuring a host of innovative, industry-leading equipment.  Highlights include the all-new JaguarDrive Selector™, JaguarSense™, a smart technical solution introducing touch or proximity-sensing control for overhead console lights and glovebox release and the optional top-of-the-range 440 watt Bowers & Wilkins speaker system delivering a powerful and vivid performance.

Available to order now, the XF made its public debut at the Frankfurt International Motor Show in September and the first customer deliveries begin in March.