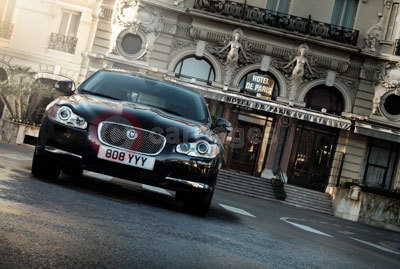 Jaguar's latest model, the XF, continued its winning streak today as What Diesel magazine named it the 2008 'Car of the Year'.  The luxury sport saloon claimed the top prize after clinching the award for top performing diesel in the 'Best Executive Car' category.

This is the tenth international award the model has received since its Frankfurt debut and with 2000 cars sold during March in the UK, it is clear that the XF has captured the imagination of the motoring fraternity and public alike.

Ian Robertson, editor of What Diesel said: "It gives me great pleasure to announce that the Jaguar XF has won the coveted title of What Diesel Car of the Year 2008. It is well deserved and is testament to all the fine people that are proud to say that they work for Jaguar. The car drives exceptionally, and looks absolutely stunning and catapults Jaguar right up the road to success."

The 2.7-litre diesel, which is available for just £33,900 on the road, was selected from over one hundred new models by a panel of 10 motor industry experts including Sue Baker, Russell Bray and Lisa Curtiss.  Praised for its 'masterful blend of beautiful styling, quality, practicality, luxury and excellent ride and handling' the XF claimed victory ahead of other category winners including, the Fiat 500, Ford Mondeo, Audi A5 and Volkswagen Eos.

Geoff Cousins, UK Managing Director of Jaguar Cars, said: "I am absolutely delighted that the XF has been named 'Car of the Year' by the jurors of What Diesel magazine. The diesel market is incredibly important for the XF - it accounts for 80% of sales in the UK and with competition getting tougher each year, this award is all the more satisfying."

Another significant factor which contributed to the XF's triumph was its class-leading residual values. Both CAP and EurotaxGlass’s have rated the diesel derivative above its BMW.

Mercedes, Lexus and Audi competitors with an RV after 36 months / 36,000 miles of 50% of the original value*. Combine this with a CO2, of 199 g/km** and the XF really is a car that will appeal both to the heart and the pocket, as judge, Lisa Curtiss agrees: "For me the XF really is an excellent choice for Car of the Year. It represents incredible value for money, particularly when you consider the level of specification you get as standard. The interior is like nothing else you have seen before and it drives like a dream."

The XF was not the only Jaguar model singled out for recognition. The 2.7-litre V6 Diesel XJ won high praise from the panel to be named the Best Used Executive Car.

Complimented for its lightweight aluminium construction, commanding drive, excellent combined fuel economy and sumptuous interior the What Diesel jurors were left in no doubt that the XJ remains one of the best executive saloons on the market today - new or used.

Paul Stauvers, Used Car Sales Manager, Jaguar UK said: "When the XJ was launched in 2003, it set new standards in handling, precision and refinement. It is fantastic to see that those characteristics continue to delight drivers and passengers today."

** The XF 2.7-litre diesel has a combined CO2 of 199 g/km, meaning it falls within UK Tax Band ‘F’. At this level it would not be subject to the proposed high level London congestion charges.