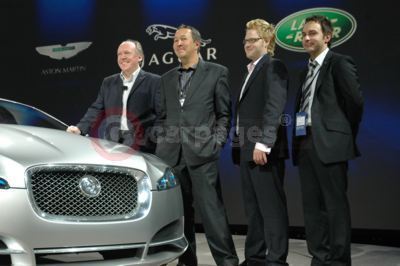 Jaguar is no longer for sale - but Aston Martin will be under new ownership by the end of the year, according to new Ford president Alan Mulally.

Mulally, who joined Ford last year after a 37-year career at plane-maker Boeing, told reporters: "Jaguar is not for sale at this time." While this comment doesn't close the door on a future sale, it seems the new boss wants to give Jaguar a chance to re-establish itself, with the new XF sports sedan as a key model in a revitalised range.

This car made its debut at the show as a concept car designated C-XF, but Jaguar Cars managing director Bibiana Boeiro confirmed the car would be produced from early 2008, replacing the S-Type and using the XF nameplate.

Designed jointly by Jaguar design director Ian Callum and advanced design studio boss Julian Thompson, the car was welcomed as the sort of car Jaguar should have been making for some time. It represents a break from the overt retro styling of the XJ, S-Type and X-Type models, using subtle design cues to create a new look for the struggling Jaguar brand.

Callum was clear about the design philosophy behind the car: "Sports sedans were Jaguar's mantle with cars such as the Mk2 and Series 1 XJ of the 1960s - and we're having it back! But we're not harking back to another era for the sake of it. Instead we need to recognise design elements and move forward in a modern and contemporary way."

He said the car's core design values were "purity, visual dynamism and beauty", and its low roof and wedge-shaped lower body gave an impression of "visual latent power". Inside, the car features a very different take on Jaguar's traditional wood-and-leather finish. The materials are there, but the wood has been scorched black, while the leather has been treated to look like carbon fibre. It's a far cry from burr walnut and cream Connolly hide.

The XF is the first of a series of new cars under development that will see all three Jaguar saloons replaced by the end of the decade. A new XJ - apparently even more radical than the XF - will follow in 2009, while the rumoured Land Rover Freelander-based crossover vehicle to replace X-Type is still coming, said Jaguar executives at the show. "Our future is even more exciting than the XF," said Callum.

However, Ford is still planning to dispose of Aston Martin, despite strong sales last year and the launch of new models including the V8 Vantage convertible. Ford Premier Auto Group executive vice-president Lewis Booth said Aston had sold 6,500 cars worldwide in 2006. "Aston Martin has developed into a strong and confident brand under Ford, and will continue to develop under new ownership," he said.