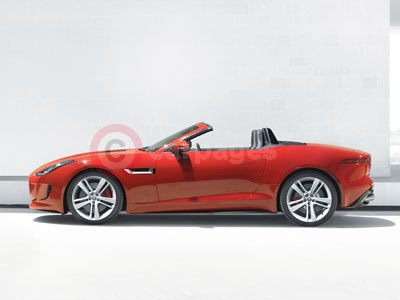 You can now order the new two-seater Jaguar F-TYPE convertible with prices starting from £58,500 for entry-level car rising to £79,950 for the V8S. First deliveries are expected in mid-2013 in the UK.

There are three variants will be available at launch – F-TYPE, F-TYPE S and F-TYPE V8 S. Each is distinguished by the power output of its supercharged petrol engine with all engines featuring stop/start technology.

An active exhaust system, which is standard on the S and V8 S models, adds another dimension of driver-engagement. Valves in the exhaust system open under load from 3000rpm which allows the exhaust note to build to a thrilling crescendo at the redline.

All the F-TYPEs are mated to an eight-speed automatic gearbox with a set of eight closely-spaced, sporting ratios in its QuickShift transmission, giving greater driver control. The V6-powered S model also includes a Dynamic Launch feature, which optimises acceleration from rest.

The exterior speaks for its self where the interior takes its inspiration from cockpits of fighter airplanes, the controls are ergonomically grouped by function. Further aeronautical inspiration can be found in the joystick-shaped SportShift selector controlling the eight-speed transmission. The air vents on top of the dashboard will only deploy when instructed to by either the driver or complex control algorithms, staying tucked discreetly out of sight in other circumstances.

We would recommend you place your order now as the order books will fill with a very long waiting list very quickly and mid-2013 is not that far away.

This is a 9-year+ news article, from our Jaguar archive, which dates back to the year 2000.

If in doubt check with your local Jaguar dealer as car prices and technical data will have changed since 2012.

Jaguar F-TYPE Images may not be UK specification cars. Colours and exterior and/or interior elements may differ from actual models.