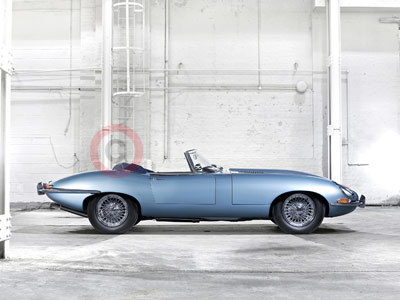 The Jaguar E-TYPE will be celebrating its 50th birthday in style this summer when more than 50 examples will join a cavalcade to Motorexpo, Britain's biggest free-to-visit motor show between 6th and 12th June 2011.

The Jaguar E-TYPE cavalcade is expected to stretch almost half a mile and will be accompanied by its own police escort. The event will take place on 6th June, starting in central London and finishing alongside he Motorexpo exhibition space, in London's Canary Wharf. The 10 mile route passes a number of famous London landmarks including the Mall, Whitehall, Trafalgar Square and the Tower of London.

Leading the procession will be a team of pro-cyclists representing Motorexpo 2011's designated charity, UK Youth. Among the team of 15, will be former F1 world champion and keen cyclist, Nigel Mansell OBE, the charity’s current president.

The cavalcade will include a selection of jaguar E-TYPE coupe and convertible sports cars, ranging from the 1961 series I launch model and covering every year of manufacture until 1974, when the last Jaguar E-TYPE rolled off the production line at Browns lane in Coventry.

The convoy of Jaguar E-TYPEs will accompany over 200 modern day cars which will occupy the exhibition space. A record number of car brands have already confirmed their attendance at this year's show, including Bentley, BMW, Jaguar, Land Rover, Mercedes-Benz, Saab, Skoda, Tesla, Vauxhall and Volvo. Organisers anticipate that 400,000 visitors will attend the free motoring showcase during its seven-day run.

"The cavalcade will be a fitting tribute to a truly iconic car in its 50th anniversary year," commented Graeme Carver, Motorexpo's CEO. "We're thrilled that Motorexpo will be the destination for the many cherished E-TYPEs that will make the journey across London, and we're certain that they will be in good company once they arrive. Motorexpo will be welcoming record numbers of vehicle exhibits this year, as well as unprecedented numbers of motoring enthusiasts and potential car buyers."

The 2011 London Motorexpo is a completely free for members of the public to attend. There are no tickets, nor no queues with access to the event can be access via one of the variety of transport options. Visitors can take the bus, London Underground or Docklands Light Railway. Alternatively, there is ample space for cars within Canary Wharf's four underground public car parks.