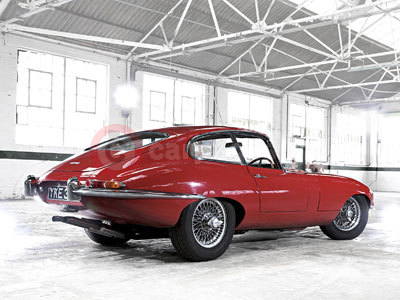 This year marks the 50th anniversary of one of the most famous and desirable cars in automotive history - the Jaguar E-TYPE.

Jaguar will be celebrating this special anniversary year at high-profile motoring events throughout 2011.

The company will mark the anniversary at the 2011 Geneva Motor Show and go on to celebrate at Goodwood's Revival and Festival of Speed, the Pebble Beach Concours d'Elegance, the Nurburgring Old Timer Grand Prix and a host of Jaguar customer, dealer and lifestyle events worldwide.

When it was launched in 1961, the appeal of Jaguar E-TYPE transcended the automotive world. Such is the inherent rightness of its proportions, stance and purity of line, that it is a permanent exhibit in New York's Museum of Modern Art.

The now iconic Jaguar E-TYPE set new standards in automotive design and performance when it was launched in 1961. Its influence is still apparent in Jaguar's modern range: cars that offer a peerless blend of performance, comfort, cutting-edge technology and award-winning design.

"Half a century of progress has not diminished the significance of the E-TYPE," said Mike O'Driscoll, Managing Director Jaguar Cars and Chairman Jaguar Heritage. "It was a sensation when it was launched, and remains Jaguar's most enduring and iconic symbol. The E-TYPE is simply one of the most exciting cars ever created and a legacy to the genius of Jaguar's founder, Sir William Lyons."

Jaguar E-TYPE owners included celebrities such as George Best, Brigitte Bardot, Tony Curtis and Steve McQueen and the sports car became as synonymous with the Swinging Sixties as the Beatles and the mini skirt.

"It is impossible to overstate the impact the E-TYPE had when it was unveiled in 1961," said Ian Callum, Jaguar Design Director. "Here was a car that encapsulated the spirit of the revolutionary era it came to symbolise. The Jaguar E-TYPE is a design that even today continues to inform the work we do in styling the Jaguars of the future."

Unveiled at the Geneva Motor Show in March 1961, the Jaguar E-TYPE caused a sensation. Capable of achieving 150mph, but costing a fraction of the price of rivals with similar performance, it was the affordable supercar and became an instant icon - remaining on sale for 14 years.