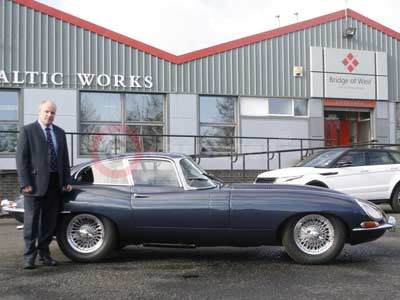 The Jaguar E-TYPE has been named the most iconic car of the last 50 years by the Association of Scottish Motoring Writers.

The award is sponsored by Renfrewshire-based Bridge of Weir Leather - the only UK supplier of hides to the motor industry - and was presented by the firm's Jonathan Muirhead to Ken McConomy, Global PR Director, Jaguar Cars.

The company's leathers feature in the Jaguar XJ and Range Rover models as well as a number of concept show cars including the DC100 potential Defender replacement and the C-X16 sports car unveiled at the 2011 Frankfurt Motor Show.

Bridge of Weir Leather Company Chairman Mr Muirhead said: "Bridge of Weir Leather is delighted to support the Association of Scottish Motoring Writers in their 50th anniversary and what better way to celebrate than by acknowledging one of the world’s most beautiful cars, a car which shares its special birthday with the ASMW."

Adrian Hallmark, Global Brand Director, Jaguar Cars, added: "The 50th anniversary of the E-TYPE is truly special - as has been the reaction throughout the year from owners and enthusiasts, many of whom weren't even born in 1961! We're honoured that the Association should present such an important award to the E-TYPE and testament to the incredible talents of the design and engineers teams that created the car - talent, I'm happy to say, that lives on today in a new generation."

Sales Director Jamie Davidson added: "Ninety eight per cent of the business at Bridge of Weir Leather is automotive and our client base continues to grow. We work with manufacturers from an early stage in the design and development process of a new model, developing leathers to suit their exact requirements. All our testing is carried out in-house to the varied specifications given to us and we are constantly abreast of changing demands and technology, for example the increasing interest in low carbon leather products."

Association President John Murdoch remarked: "We wanted to do something a bit different at this year’s Scottish Car of the Year awards to mark our golden anniversary. When the idea of voting for our most iconic car to be launched in the years since the group's inception was muted it was unanimously agreed by the group’s 16 full members."

ASMW Secretary Stephen Park continued: "There were several worthy nominations for this anniversary award but the E-TYPE emerged as a clear winner. With Jaguar also scooping two Scottish Car of the Year category wins for the XKR-S and XF 2.2d it’s great to see this brilliant British brand remain at the forefront of automotive design and driving dynamics."