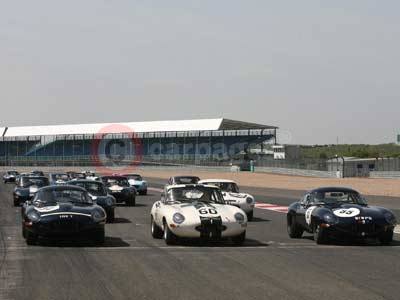 The Jaguar E-TYPE, which is celebrating its 50th anniversary this year, has been voted the UK's favourite sports car by nearly 3000 voters in an online poll.

The poll was run by organisers of the Silverstone Classic motorsport festival, taking place between 22nd and 24th July 2011.

"Britain is famous for its sportscars but until now no one has ever been able to say which one is the best. That's a long-running debate we have now put to rest," said Silverstone Classic Event Director, Nick Wigley.

58 Jaguar E-TYPEs will be at Silverstone Classic with two headline races. The organisers are hoping to set a world record with a cavalcade of 1000 road-going examples in a parade around the 3.66 mile Grand prix circuit.

The three day festival will see 22 races featuring a range of historic and classic racing cars. Touring Cars from the 1950s, 60s and 70s, Le Mans racers, GTs and the Group C sports cars from the 1980s will all be attending in the event.

Free live music concerts on the Friday and Saturday evening will see stars including Suzi Quatro, 10cc and Wishbone Ash.

Other events during Silverstone Classic include a steam traction rally, a period fun fair, , go-karting, a lawnmower grand prix, aerobatic displays with a Spitfire and Mustang as well as The Blades aerobatic display team and parachutists from the Red Devils.