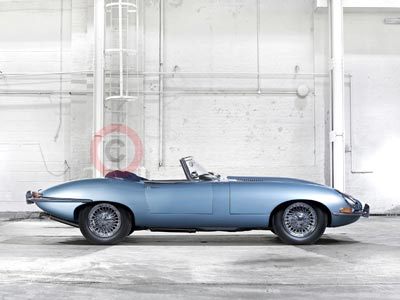 The iconic Jaguar E-TYPE has turned heads and captured hearts for the past 50 years. Today it has been named by Autocar as its greatest ever road test in the week that the magazine celebrates its landmark 5000th road test. In awarding the honour, the Autocar test team cited the Jaguar E-TYPE's dynamics, effortless power and timeless design among the chief reasons for its win.

Ian Callum, Jaguar Design Director said: "The Jaguar E-TYPE was a leader in design and handling in the 1960's and '70's and this accolade from Autocar shows that it is a car that maintains a sense of magic. It's a British icon and testament to Sir William Lyons and Malcolm Sayer. The influence of the E-TYPE runs through the veins of Jaguar design and as we developed our new XKR-S we continued the passion for creating beautiful fast cars that brought the E-TYPE to life fifty years ago."

To mark the anniversary Jaguar has commissioned a 'Collectors' Edition' coffee-table book titled 'E-TYPE - 50 Years of a Design Icon'. The book charts in incredible detail the remarkable story of this revolutionary car and captures the opinions of a series of British racing drivers who between them have either owned or have extensive experience of the Jaguar E-TYPE.

Sir Stirling Moss commented: "The XK120 was an amazing thing coming right after the war but when the E-TYPE arrived, even knowing William Lyons and Bill Heynes, I was as stunned as everyone else. It was a very special car and is still just as stylish today. It is such a thoroughbred car, it has an elegance that all Jaguars share and remains with them today."

Sir Jackie Stewart added: "Nothing let this car down, particularly when it first came out. In its purest form it was an incredibly beautiful car. Its lines were so clean. It revolutionised motoring and everyone wanted one. Why have a Ferrari when you could have one of these?"

Martin Brundle, a proud owner of a red Jaguar E-TYPE roadster explained: "Very few cars of that era can still keep up with modern traffic but I can happily jump in it and cover 500-miles with no problem.  It has always looked sensational and I think it has got better with age. The great thing when driving it is the way people move over and let it past so they can have a look at it."

A must-have for both Jaguar E-TYPE owners and Jaguar enthusiasts alike, the book is available in two stunning formats: a premium version and a limited edition VIP volume. Each individually numbered VIP book is hand-bound in a specially commissioned reproduction of the Jaguar E-TYPE's original upholstery leather and presented in its own slipcase.