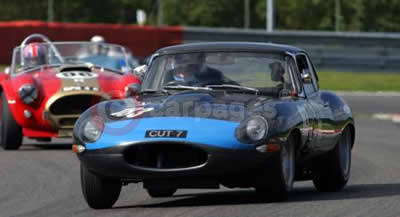 H&H, Europe’s largest specialist historic car auction house, is starting 2005 with a bang. It is presenting an outstanding array of cars for its first sale of the year, at the International Historic Motorsport Show, Stoneleigh Park, Warwickshire on February 26th.

Entries include a ‘barn find’ 1959 Jaguar XK150S Drophead Coupe with a fascinating and unique history. The car - which bears the entirely appropriate registration plate ‘S 150’ - was bought new by Esmond Searle, a friend of Jaguar’s PR Director Bob Berry. The car was specially built for Searle, who kept it in a carpeted garage. He ran it as little as possible, but it was a matter of honour that, when he did, he would not put it back into the garage before he had driven it at 100mph.

The vendor, who is the vehicle’s second-ever owner, bought the car for £5,000 in the late 1970s - at the time, the highest price ever paid for a 150S. In the 25-plus years that the car has been in his care, it has covered just 5,000 miles, the majority of which was on the Mille Miglia. This very special Jaguar has been unused for the past seven years, and is extraordinarily original, down to the factory-fitted plastic hood and headlining. With an estimate of £30,000-40,000, it represents a rare opportunity for a Jaguar enthusiast to acquire a unique machine that requires a comparatively small investment to preserve its originality and make it a very usable and enjoyable motor car.

A very famous Jaguar - the original `CUT 7', the ex-Dick Protheroe, 1961 Jaguar E-TYPE 3.8 Fixed Head Competition Coupé - will also go under the hammer on February 26 (estimate £275,000-£325,000). `CUT 7', the fourth E-TYPE ever built, was delivered as a birthday present for Dick Protheroe's wife and prepared for racing by Dick's own very capable team. It was campaigned extremely successfully during its first racing year, 1962, achieving many firsts including wins at Silverstone, Mallory Park and Crystal Palace. The car’s FIA papers list previous owners as David Wilding, John Young, D. Bell and Colin Pearcey.

The motor car sale will be preceded (on February 25th) by the automobilia auction, which features a quite outstanding selection, including no less than 4,000 models.

This is a 16-year+ news article, from our Jaguar archive, which dates back to the year 2000.

If in doubt check with your local Jaguar dealer as car prices and technical data will have changed since 2005.