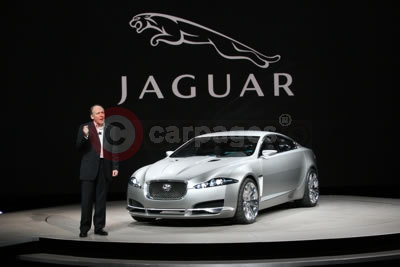 The new Jaguar XF has picked up a major reader award as ‘The Most Exciting Car to be Launched in 2007’ at the prestigious What Car? Car of the Year Awards, held in London last night.

Thousands of readers of Whatcar.com and the woman’s glossy magazine Eve voted the new XF top of 10 cars not yet on sale, but due to be launched in 2007.

Steve Fowler, Group Editor of What Car? magazine, commented: “There’s little that excites our readers as much as a new Jag - this is the second year running that Jaguar has won our Reader Award following last year’s success with the XK. There’s a huge amount of interest in the new XF, fuelled, no doubt, by the stunning C-XF concept unveiled at Detroit last week. If that interest translates into sales, then the future looks very good indeed for Jaguar.”

Bibiana Boerio, Managing Director of Jaguar Cars, said: “We are delighted with the very positive reaction the XF is creating already in advance of its launch.  The C-XF was the star of the show at Detroit and as we move into a new era here at Jaguar, it’s fantastic that the public continue to support us. We’ve already had an enormous amount of interest in both the C-XF and the XF and we’re looking forward to building on this when the XF goes on sale.”

Jaguar has recently announced that the Jaguar XF will be revealed for the first time in autumn this year.

The Jaguar XF will be built at Jaguar’s state-of-the-art manufacturing facility at Castle Bromwich, Birmingham.