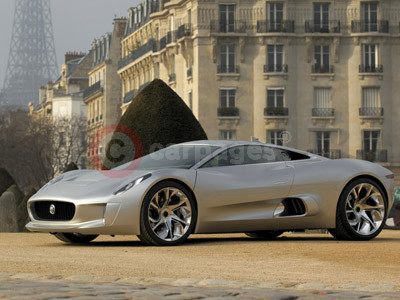 The Jaguar C-X75 was last night awarded the Louis Vuitton Classic Concept Award 2010 by a panel of luminaries from the worlds of design, fashion and luxury.

Undoubtedly the star of the 2010 Paris Motor Show, the Jaguar C-X75 - judged by a Louis Vuitton panel - has once again beaten stiff competition. The panel was led by renowned automotive consultant and inaugurator of the prize, Christian Philippsen.

"Ian Callum, Jaguar's design director, and his team have achieved not only a beautiful design in clothing a world-premiere and mouth-watering technology, but also a true Jaguar, projecting the brand's DNA into the future without an ounce of nostalgia," said Philippsen.

Jaguar, like Louis Vuitton, has built its reputation on the key foundations of luxury, attention to detail and understated elegance.

The JaguarC-X75 is an electric supercar built to celebrate 75 years of the Jaguar marque and was praised by the panel for the way in which it showcased the technology of the future with a beautiful design without looking to the past.

"It's fantastic for us to be recognised by the world of fashion with this award," said Ian Callum, Design Director for Jaguar. "We're at our best when we're breaking the mould - making our cars stand out for all the right reasons.

The Jaguar C-X75 is only a concept supercar, but it's a clear statement of Jaguar's intent to continue creating bold, innovative and beautiful performance cars."

The entire Jaguar range has been the recipient of numerous plaudits worldwide in recent years with the pinnacle of the revitalised line-up, the Jaguar XJ, having already won more than 25 major international awards since its launch just over a year ago.