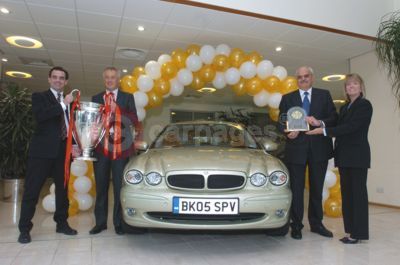 To mark the occasion, Rick Parry, Chief Executive of Liverpool Football Club, brought the European Champions League Cup to the plant so that employees could see Merseyside's two pieces of European silverware side by side.

The Jaguar facility scooped the accolade last month after its product, the X-TYPE, led Jaguar to a remarkable quadruple success in J.D. Power's annual survey of US Customer satisfaction:

This major achievement was led by X-TYPE, which is Jaguar's best performing model. The Merseyside manufactured car improved 37 points in the study, a 35% leap over last year's results. The J.D. Power Study ranks new vehicle quality after 90 days in the hands of customers and is recognised as the industry's top benchmark for quality.

X-TYPE is Jaguar's fastest selling model with over a quarter of a million cars sold world wide since its launch in 2001. The X-TYPE range includes both saloon and estate models with a range of petrol and diesel engines.

The latest edition to the X-TYPE stable, the X-TYPE 2.2 Litre Diesel, will hit UK showrooms in September. The Media launch for this new high performance model commenced this week in Portugal with early feedback from journalists looking extremely positive.

Colin Tivey, Operations Director for the Halewood plant, said: "I am delighted to receive this award on behalf of the plant. Our consistent focus on quality and continuous improvement has been rewarded with this important benchmark of customer satisfaction. I'd like to congratulate the whole Halewood team on their enthusiasm, commitment and pride in the product."

Thomas O'Brien, Chief Executive for The Mersey Partnership was thrilled with Jaguar's news, commenting: "Halewood's Gold Plant Award is great news and yet another top European honour for the region. We have two football teams in Europe, a city which will be the 2008 European Capital of Culture, and now we have the top European car manufacturer. It is an excellent set of achievements."

“The improvement at Halewood over the past few years has been spectacular and is due to the efforts of the plant’s entire workforce,” said Dave Sargent, executive director of European operations at J.D. Power and Associates. “This excellent performance shows once again that the UK can build cars that compete with the best in the world for quality.”

This is a 16-year+ news article, from our Jaguar archive, which dates back to the year 2000.

If in doubt check with your local Jaguar dealer as car prices and technical data will have changed since 2005.

Jaguar X-TYPE Images may not be UK specification cars. Colours and exterior and/or interior elements may differ from actual models.