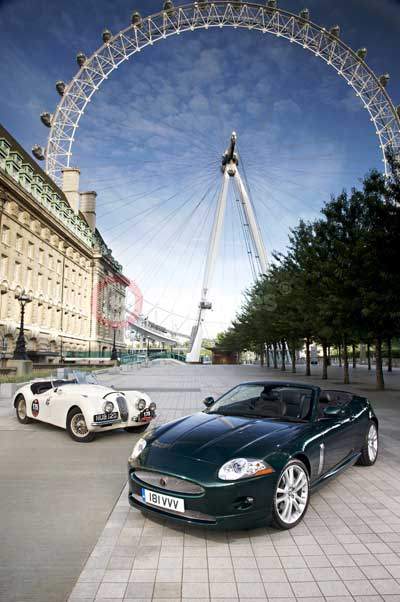 Sixty years of the Jaguar XK

Jaguar Cars Ltd will now officially celebrate sixty years of the XK on the Hackett Beaujolais Run in November, and the company has joined with the organisers in issuing a challenge to motoring editors in “Fleet Street”.

Jonathan Griffiths from Jaguar Cars said: “ The Beaujolais Run was the brainchild of Allan Hall a Sunday Times journalist who, in 1972, issued a challenge to fellow journalists and members of the public.

“ In the early days it was all about speed and which journalists would get the Beaujolais back to their offices first. Now it is about a group of motoring enthusiasts getting to Beaujeu, near Macon by the shortest route and raising money for charities as they go.”

He added: “ Jaguar has joined with the organisers in issuing a challenge to Fleet Street and the major motoring magazines once again. We want to see as many motoring journalists competing against one another in this, our sixtieth year of the XK, and raising lots of money for this year’s charities.”

In a fitting competitive tribute, the ‘Big Cats’ will compete amongst a varied and spectacular field including everything from Ferrari to Frazer-Nash.

This year’s run will see a maximum of sixty vehicles compete to “Bring Back the Beaujolais”.  Famous faces and eminent motoring journalists will once again join this showcase of the unofficial motorsport calendar. Those who accept this fiercely fought challenge will battle it out on French soil, covering some of the most spectacular roads on the continent.

This “Mad Dogs and Englishmen” event is once again full of surprises and “money can’t buy” experiences; from Embassy to private Chateaux and public Fete, all in the name of raising money for worthwhile causes.  This year the run will rest its spiritual home at Goodwood bound for the bright lights of the city.

Sir Terence Conran’s Bibendum restaurant in London will welcome a grid at 0800 hours on Tuesday 18th November 2008 with competitors’ expectations running high.  Jeremy Hackett, Founder of the Hackett brand, will then join competitors to enjoy an exclusive Champagne Taittinger reception at the British Embassy in Paris.

En route to Louis Jadot’s vineyards in deepest Burgundy, the now famous navigational shoot out at the heart of this iconic event takes place.  Teams will head south to Macon via a series of cryptic checkpoints, in a battle to cover the course in the shortest possible distance.  On arrival in Macon, Footman James will wine and dine competitors in true French style as they eagerly anticipate the spectacular midnight release of this year’s harvest.  A black tie prize giving dinner in a spectacular location awaits competitors in Paris on their return leg.

In a blaze of glory, on the evening of Friday 21st November 2008, the Jaguar led pack will light up the King’s Road as they return this year’s harvest to Blighty.

The Jaguar Daimler Heritage Trust and Jaguar Cars Ltd will ensure that competitors have the unique opportunity to compete against some of the finest metal to leave Brown’s Lane and Gaydon.

To register your interest to join this year’s ‘Run please visit www.beaujolaisrun.com