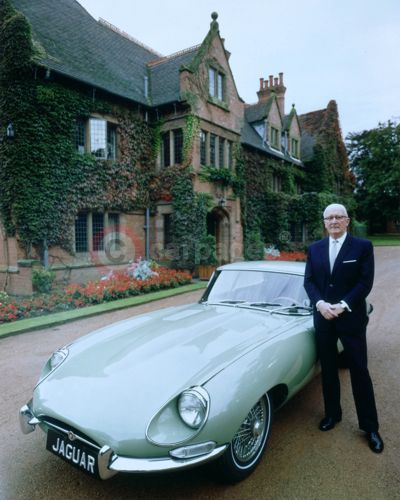 Today, 4th September 2007 marks the 85th anniversary of Jaguar Cars, founded by Sir William Lyons in 1922 on his 21st birthday. Since then, Jaguar has evolved from the production of motorcycle sidecars to become one of the world’s leading designers and manufacturers of sports cars and premium saloons.

William Lyons began in a tiny garage producing just one motorcycle sidecar a week with his partner at the time, William Walmsley who then left the company in 1934. In time, the business succeeded beyond his expectations to become a cultural icon producing some of the most aristocratic and stylish cars ever built. The most famous of these are the legendary E-TYPE of 1961, the unforgettable sports racing car and Le Mans winner, the D-type of 1955 and the XJ series of saloons.

The Jaguar model range has changed remarkably over the past few years, and most recently the company announced the new XF which will be revealed at the Frankfurt Motor Show on 11 September 2007.

Michael Quinn, grandson of Sir William Lyons and dealer principal at Jaguar R.A. Creamer in Kensington said: “The new XF is a very exciting addition to the Jaguar range and I believe it follows the true values that were held dear to my grandfather. The cars he produced were always forward thinking and I'm confident he would have approved of this car and what it represents.”

The XF is a four-door Jaguar that fuses the style and performance of a sports car with the refinement, space and sophistication of a luxury saloon. With the visual excitement of a coupe, but room inside for five adults to enjoy, the XF is a car that will provide a truly engaging driving experience for all.

The new XF enters the range in the niche previously occupied by much-loved mid-sized Jaguar saloons such as the original XJ Series 1 launched in 1968.

Jaguar’s design director, Ian Callum who is responsible for the new XF was certainly influenced by the last car that Lyons was involved with: “Cars like the original XJ6 left a lasting legacy and my ambition has been to create something as seminal. The XF is that car.”

Featuring the new JaguarDrive SelectorTM with the option of manual selection through Jaguar Sequential ShiftTM, the XF is available with a 2.7-litre V6 twin-turbocharged diesel, a 3.0-litre V6 petrol and a naturally aspirated and supercharged 4.2 V8 petrol.

Not only is XF a stunningly beautiful car which will appeal to emotional buyers, it is a model which delivers exceptional value for money for rational purchasers. Available with three trim levels – Luxury, Premium Luxury and SV8 – pricing is extremely competitive throughout the range with the Luxury 2.7 diesel starting at £33,900 OTR. The XF is available to order in the UK now. The first cars will be delivered to customers in March 2008.

Another recent addition to the Jaguar range is the all-aluminium XK unveiled in the autumn of 2005 and introduced in March 2006. The XK has pushed back the boundaries of GT sports car motoring and epitomizes the Jaguar tradition of beautiful, powerful, ground-breaking sports cars.  Behind its stunning looks, the XK bristles with practical, intuitive, modern technology, clearly focused on enhancing the driving experience.

The flagship of the Jaguar range, the XJ continues to be respected and admired by customers throughout the world. It is renowned for its all-aluminium body construction, state-of-the-art technologies, outstanding craftsmanship and build quality. Since its launch, the model line-up has been extended to include the XJ long wheelbase, the special edition XJR Portfolio, the XJ armoured vehicle and the recently introduced XJ long wheelbase diesel.

The Jaguar X-TYPE, the smallest car in the Jaguar range is available as a saloon or estate and is built at Halewood, Jaguar’s award-winning manufacturing facility in Liverpool. With a revised and simplified model line-up, the X-TYPE for 2008 Model Year now offers customers outstanding value-for-money across the range with a breadth of feature additions and changes to exterior styling. Priced from £22,500, the 2.2-litre diesel engine remains the most popular choice in the X-TYPE model line-up.