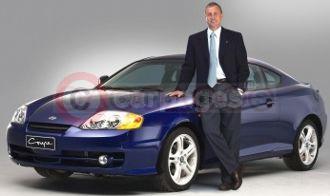 They shoot, they score! Hyundai has once again pulled off a coup by announcing it will again be official automotive sponsor of the FIFA World Cup in 2006, being staged in Germany.

The announcement was made at a special ceremony at FIFA headquarters in Zurich, Switzerland, which was attended by Dutch footballing legend and Hyundai footballing ambassador Johan Cruyff.

As the official automotive sponsor, Hyundai will provide ground transportation for the teams, players, FIFA officials and media throughout the tournament.

In addition, Hyundai will sponsor at least nine other FIFA sanctioned championships between 2003 and 2006, including the FIFA World Youth Championship, the FIFA Women’s World Cup in China and the FIFA Confederations Cup in France.

Hyundai was official automotive sponsor for the 2002 World Cup in Korea and Japan, and achieved massive levels of awareness during the campaign. Hyundai was featured on the perimeter boards at each stadium used, and provided 1,053 vehicles for official use in both Korea and Japan.

An extensive television advertising campaign was conducted around the world to announce Hyundai’s World Cup sponsorship, while footballing legend Johan Cruyff was appointed as Hyundai’s Footballing Ambassador – to spread the word of Hyundai’s sponsorship.

Mr Cruyff praised Hyundai’s involvement at the 2002 FIFA World Cup, saying the organisation was superb. He added football was a way of bringing people together around the world, and spreading goodwill through sporting competition.

More than 1.5 billion people – a quarter of the world’s population – watched at least some of the world cup final between Germany and Brazil alone, while in the UK 17 million people watched England’s heartbreaking defeat against Brazil.

Mong Koo Chung, Hyundai Motor Company Chairman, said: "It is an extraordinary privilege and opportunity for Hyundai Motor to continue its partnership with FIFA for the 2006 World Cup."

Hyundai has also sponsored the Euro 2000 Championship, as well as being one of the major sponsors of the 1988 Seoul Olympics.

This is a 20-year+ news article, from our Hyundai archive, which dates back to the year 2000.

If in doubt check with your local Hyundai dealer as car prices and technical data will have changed since 2002.