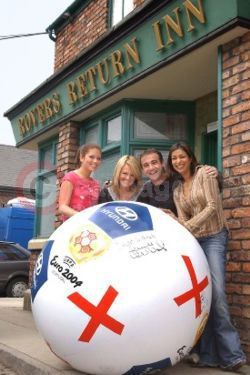 The England team, currently in Manchester making final preparations before they fly to Portugal, were given a boost by regulars from the Rovers Return, who signed messages of support on Hyundai’s Goodwill Football. The ball, which is touring the celebrity circuit collecting good luck messages for Beckham and Co. will be auctioned at the end of its tour, with all the proceeds donated to children’s charity SPARKS.

Adding her good luck message to the ball, Sally Lindsay said: "The anticipation, excitement and heartache of watching England in action is felt as much in the Rovers as any pub in England. The whole cast and crew of Coronation Street wishes the England squad the very best for EURO 2004™."

Michael Le Vell added: "We are all massive England fans on the show so it’s great to have the opportunity to really show our support for the lads and raise some money for a very worthy charity. Hopefully the lads will bring home a trophy for us all to celebrate this summer. Come on England!"