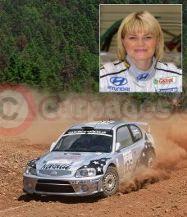 It will be the first works-built Hyundai Accent WRC³ rallied by anyone other than Hyundai Castrol World Rally Team's three contracted drivers (Armin Schwarz, Freddy Loix and Juha Kankkunen). Natalie will also become the world's only female driver currently competing at the sport's highest level in a state-of-the-art world rally car.

The car, which has previously been driven by Loix on the 2002 Safari Rally, will be prepared and run by Motor Sport Developments. It will be technically identical to the works Hyundai Accent WRC³s entered on the same three events and run on Michelin tyres, but will feature Natalie's signature silver star-spangled livery.

The programme of events begins in Auckland on 3 October, when the four-day Propecia Rally New Zealand begins. While her rally car is shipped from Auckland to Perth, Natalie will return home to Wilmslow in Cheshire for just two weeks before flying to Western Australia for the Telestra Rally Australia, which begins on 31 October.

Soon after the finish, Natalie will head back to the UK to prepare for the final round of the FIA World Rally Championship, the Network Q Rally of Great Britain, which begins in Cardiff on 14 November. Her Australia rally car will also be flown back to the UK, where MSD has planned an intensive five day rebuild programme to prepare it for the Rally GB.

Natalie has finished top lady driver on all three events in the past (NZ and Australia in 2001 and on the Rally GB in 1999). She will be co-driven by former British and FIA Teams' Cup Rally Champion, Roger Freeman.

Natalie said: "We did a good couple of days testing in Wales with a Hyundai WRC², where we covered 250 trouble-free kilometres, and that led to MSD offering me a Hyundai Accent WRC³ for the last three rounds of the FIA World Rally Championship. I'm really hoping my luck will change and we have a good finish to the year."

This is a 20-year+ news article, from our Hyundai archive, which dates back to the year 2000.

If in doubt check with your local Hyundai dealer as car prices and technical data will have changed since 2002.