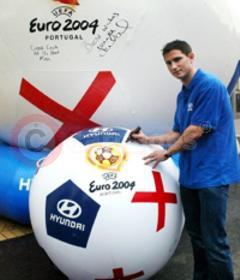 Hyundai Team Up With England Star Frank Lampard To Gather Messages Of Goodwill From Football Fans Across The Country.

England ace Frank Lampard kicked-off Hyundai’s EURO 2004™ good luck campaign and is urging football fans to leave a message of support for England’s European Championship challenge on the Hyundai ‘Goodwill Ball’ when it comes to their town.

Lampard, who has 17 international caps under his belt, added his own message of support for England’s EURO 2004™ bid this summer to Hyundai’s giant four metre wide ‘Goodwill’ football and simultaneously kick-started the campaign to gather similar messages from England fans across the country.

The Hyundai ‘Goodwill Ball’ started in Brighton at the weekend, and hundreds of supporters turned out to add their messages of support for Sven’s men. They could also test their own football skills at the accompanying interactive road show.

The campaign is part of a series of activities organised by Hyundai Motor Company, official partner to EURO 2004™, in the build up to the championships.

Hyundai has issued a giant ‘Goodwill Ball’ to each competing nation to be signed with messages of support before they congregate in Lisbon, Portugal for a final presentation ceremony ahead of the official tournament curtain raiser.

Speaking at the launch, the star midfielder, Lampard said: "The fans are so important to the England team and players. Having fantastic support can really give you the edge when you are out there on the pitch and when you are a long way from home it’s good to know you have the support of the nation behind you. The Hyundai ‘Goodwill Ball’ gives the fans the chance to come out and show their support for the England team and hopefully give the lads the edge in Portugal."

Hyundai spokesperson, Jim Campbell, added: "The Hyundai ‘Goodwill Ball’ road show is just one part of a series of activities Hyundai has planned to help football fans get behind the England team in their bid for the European title. This giant ball gives the whole country the chance to send their own little bit of luck out to Portugal with the England team and will hopefully inspire them to victory."

Hyundai Sonata Images may not be UK specification cars. Colours and exterior and/or interior elements may differ from actual models.