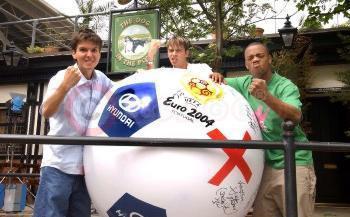 The announcement of Sven-Goran Eriksson’s England squad for the European Championships has put the tournament high on every football-fan’s agenda and the Hollyoaks lads jumped at the chance to send a good luck message on behalf of the show that Sven’s-men might bring home the silverware from Portugal this summer.

As part of its official sponsorship of the UEFA European Championships, Hyundai Car UK has produced an oversized, one-metre-wide, football to gather as many celebrity messages of support for the England team as possible before it is auctioned off in aid of the children’s charity SPARKS.

The Hollyoaks stars are the latest in a long list of famous names to have pledged their support to England’s EURO 2004™ challenge that includes current Chelsea and England star Frank Lampard, former England manager Sir Bobby Robson and England’s most capped player Peter Shilton.

The Hollyoaks trio took time out from filming to add their special messages for the England team to the Hyundai Goodwill Ball outside village local ‘The Dog in the Pond’.

On signing the ball Ashley Taylor-Dawson, said: "The whole cast and crew of Hollyoaks wishes the England lads all the very best for the tournament and hopefully we’ll be able to celebrate an England victory on the show.

"Sven’s picked a great squad for the tournament and whatever happens in Portugal we’ll be cheering them on from back home during the summer."

Jamie Luke added: "As England fans we all jumped at the chance to show our support for the England squad and it’s great that we could do this whilst helping to raise money for a very worthy charity as well."

"I really think England can go all the way this year and bring home a new trophy for the cabinet. We’ve waited long enough and the England lads can count on our support for their campaign," added Guy Burnet.