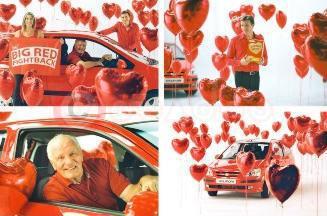 Hyundai has teamed up with Shredded Wheat and the British Heart Foundation (BHF) in a promotion which not only raises money for a campaign to fight heart disease, but gives the chance to win one of five trendy Hyundai Getz cars!

Tying in with the BHF’s Heart Week (5-13 June) campaign, ‘The Big Red Fight Back’, Hyundai will be offering five Getz 1.3 Sports as prizes, in the promotion which will be seen on more than five million boxes of Shredded Wheat and Shredded Wheat Bitesize, from June onwards.

Shredded Wheat will donate £1 for every Big Red token sent in (which can be found on special promotional packs). The money raised will go towards helping the BHF fight back against heart disease – raising vital funds for heart research, education and patient care programmes.

And five lucky Shredded Wheat eaters will win one of the five cars instantly! Big Red flashing lights and heart-shaped winning certificates in five of the boxes will show them they’ve won a Hyundai Getz.

The ‘Big Red Fightback’ will be heavily publicised by a display campaign in branches of Sainsbury’s up and down the country, as well as TV ads starting on 31 May on ITV1, Channel 4 and 5.

Douglas Rouse, Head of Corporate Fundraising at the British Heart Foundation says: "We’re excited to have such fantastic support from Shredded Wheat and Hyundai. Being able to communicate our campaign to millions of consumers will make a huge difference to our fundraising efforts."

Hyundai, as sponsor of the UEFA Euro 2004 tournament, is delighted to support this BHF campaign.

The Getz has become Hyundai’s most popular car since its launch in 2002. The winner of two major motoring awards last year, Hyundai sold more than 12,000 examples last year in the UK.

The Getz 1.3 Sport was launched by Hyundai earlier this year, with sporty looks but a low insurance group to appeal to the younger driver. It sells for the highly competitive price of £9,295 on the road – which includes a five year unlimited mileage fully transferable warranty, three years RAC Assistance and six years anti-corrosion cover.

Hyundai Getz Images may not be UK specification cars. Colours and exterior and/or interior elements may differ from actual models.