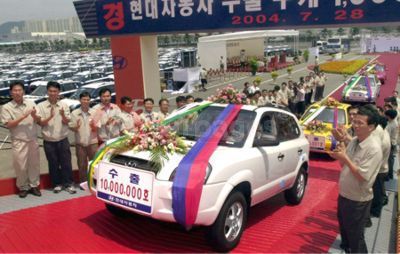 Hyundai passed an important milestone in its short but impressive history, when the 10 millionth export vehicle rolled off the production lines in Ulsan, Korea. The milestone car was a Tucson, bound for France.

Kim Dong-Jin, Hyundai Motor Company (HMC) Vice Chairman and CEO, said: "What we are really celebrating today is the growth of the Hyundai family which now extends to 10 million satisfied customers around the world – a fact which makes us especially proud.

He added: "Last year, for the very first time HMC saw its overseas sales break past the one million per annum mark, a feat which is second only to Toyota in terms of volume. Today, HMC employs, directly and indirectly, some one million people worldwide and conducts business with nearly 2,000 local and overseas suppliers."

The number of export markets has grown in step with the increase in exports: in 1980, Hyundai vehicles were sold in just 38 countries but the number has now grown to 193, with Iraq, Afghanistan and Tunisia accounting for the most recent additions.

At the same time, the number of dealers worldwide has surpassed 5,000 while new export bases have been established through HMC subsidiaries in India and Turkey which now serve markets worldwide.

Set end-to-end, the 10 million vehicles would form a line 45,000km in length — exceeding the circumference of the globe.

Even more remarkable is the fact that Hyundai has reached this milestone just 28 years after achieving its very first overseas sale, a modest order for six Ponys from a taxi fleet customer in Ecuador.

By far, the most popular Hyundai export model has been the Accent which accounted for 2.1 million of the 10 million total, followed by Elantra which in its three versions make up some 1.72 million units of the total.

Hyundai Tucson Images may not be UK specification cars. Colours and exterior and/or interior elements may differ from actual models.