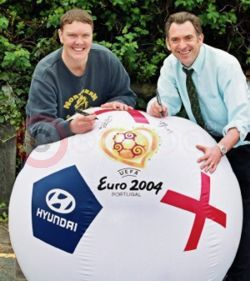 Stars of ITV1’s Emmerdale add their signatures to Hyundai’s giant good luck football in support of the England squad and SPARKS children’s charity.

Emmerdale’s England-duo added their names to the Hyundai Goodwill Ball and in doing so Tony and Dominic also sent a message of good luck on behalf of the show that Sven’s men might bring home the silverware from this summer’s football fiesta in Portugal.

As part of its official sponsorship of the UEFA European Championships, Hyundai UK has produced an oversized, one-metre-wide, football to gather messages of support for the England team from celebrities and sporting heroes before it is auctioned off for children’s charity SPARKS.

The Emmerdale stars are the latest in a long list of famous names that have already added their support to England’s EURO 2004™ challenge that includes current Chelsea and England star Frank Lampard and England legend Peter Shilton.

Adding his signature to the ball, Tony said: "The excitement, anticipation and usual heartache of watching England in action is felt as much in the Woolpack as any other pub in England.

"But I have a good feeling about this year’s tournament and I really think that if the country gets behind the lads they can go a long way in the competition.

"The whole of Emmerdale wish the England lads all the best for the tournament and with a bit of luck there’ll be no heartache this time round."

Dominic added: "England have been on the up and up under Sven and there’s nothing like a good England performance to lift the spirits of the whole country.

"Emmerdale are really hoping that we can celebrate an England victory on the show and I think Beckham and Co can really deliver this year.

"It’s great to be able to sign our support on the Hyundai Goodwill Ball and the fact that we’re helping to raise some cash for a very worthy charity really rounds things off."