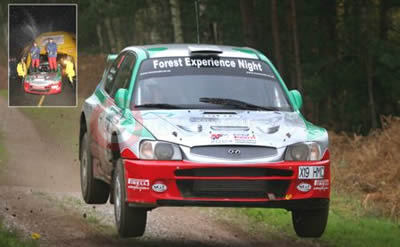 This topped a remarkable year, in which his Accent WRC3 won three events, finished second once, third once, fourth once, and only had one retirement when he hit a boulder in the middle of the road at the Trackrod Rally in Yorkshire.

David Higgins led the championship for most of the season and all he had to do on the Tempest was to finish ahead of his nearest challenger, Austin McHale in a Ford Focus. This he duly did, finishing second to McHale’s third.

David’s team boss Steve Petch, who runs Hyundai dealerships in Durham and Darlington, said he was delighted at the Accent winning its first major British title and has immediately started planning for 2005.

He said: "I am very proud of everyone who has worked so hard to make this happen, and I really hope we can defend our title next year."

A delighted David, meanwhile, added: "The car was unbelievable and ran like a dream all season. Nothing went wrong, and it really showed the Accent is as good and even better than some of the more recognised World Rally Cars.

"We would not have been in the running without a great team behind us with SGP Motorsport, with many thanks to Steve Petch for all his support. Also all our corporate partners for the year, who have ensured we have been able to start all the events in the series," he said.

Hyundai plans to re-enter the World Rally Championship in 2006, with its new C/D sector car prepared by its works team based at its European headquarters near Frankfurt.

Hyundai Accent Images may not be UK specification cars. Colours and exterior and/or interior elements may differ from actual models.