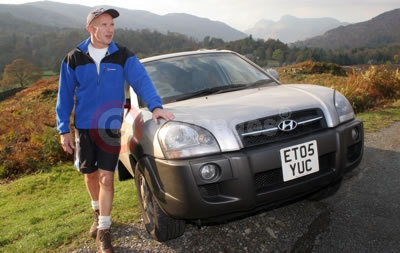 As a world-conquering mountaineer, Alan Hinkes depends on the finest quality equipment to ensure a safe route to the summit. So when it comes to navigating the open road, it’s in complete keeping with his go-anywhere spirit and true grit achievement that he is now behind the wheel of a Hyundai Tucson 4x4.

Hyundai has provided Alan with a top of the range Tucson CRTD CDX to help celebrate his becoming the first Briton to conquer the world’s 14 highest peaks. He clinched the record when he reached the top of Kangchenjunga in Nepal - number three on the list in terms of altitude, but respected as the toughest climb of them all - earlier this year.

The Tucson matches Alan in being a rugged performer: over recent months it has been carrying him the length and breadth of Britain on his Full Mounty lecture tour and also provided surefooted transport to more remote mountain regions where he has been leading climbing expeditions.

Alan, who is a technical consultant with clothing specialist Berghaus, also enjoys winter outdoor sports such as skiing and ice climbing in disused quarries. He says he’s relishing the opportunity of putting the Tucson through its paces, not least on the steep country roads around his home patch in Richmond, North Yorkshire.

“Apparently it’s going to be a hard winter, and I hope the weathermen are right. I can’t wait to test it out,” he said. “I certainly won’t just be using it to go to the supermarket!

“The extra ground clearance and the heavier weight - not to mention the four-wheel drive - will let the Tucson just plough through lying snow, conditions that would stop anyone in an ordinary car in their tracks.”

The Tucson features an intelligent system, which automatically switches from two- to four-wheel drive when it detects low grip conditions. The driver can also make the switch using a control on the dashboard, even when the vehicle is in motion (speeds up to 21mph). Secure handling is further helped by the standard-fit ABS with Electronic Brakeforce Distribution and traction control.

Alan, a 51-year-old former geography teacher, has joined the ranks of history’s Great British adventurers after 18 years and 30 expeditions, joining an elite group of just a dozen climbers worldwide.

This is a 17-year+ news article, from our Hyundai archive, which dates back to the year 2000.

If in doubt check with your local Hyundai dealer as car prices and technical data will have changed since 2005.

Hyundai Tucson Images may not be UK specification cars. Colours and exterior and/or interior elements may differ from actual models.