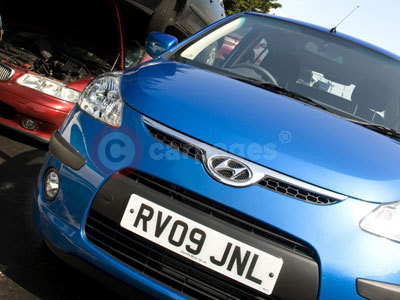 Car dealers like to think they have seen it all, but even veterans of the industry have raised an eyebrow at the stories coming out of Hyundai dealerships this week as scrappage 'goes live'.

It's no surprise that customers have been flocking to showrooms wanting a new Hyundai under the government-sponsored scheme, but some of the cars they are trading in have come as a bit of a shock. One dealer was amazed to see a Jaguar XJ-S being sent to the scrapper in exchange for a new Hyundai i10, while another crushed an XJ6 to make way for a Hyundai i20. BMWs, Audis and Mercedes cars and vans were relatively common sights on their way to the automotive knacker's yard (34, 22 and 32 respectively) as were Mazda MX-5s (six in total), MGFs (seven) and several Saabs.

The oldest car to be traded in this week was a 1966 Austin 1100, closely followed by a Morris Minor, which was just two years younger. Both were said to be 'basket cases' and not worthy of restoration, although the scrappage rules will allow some of the parts to be used again to keep other classics on the road. An MG Midget, MGB GT, Nissan 300ZX and even a Fiat X1/9 also appear on the list.

The most common car to be traded in is the Nissan Micra, with over 200 owners now signed up to swap into a new Hyundai. Next most popular is the Ford Escort with 126 on their way from Hyundai dealers to the crusher.

Many of the buyers have also used the scrappage scheme to get shot of old cars which have major mechanical faults but still have a current MoT and are therefore eligible. Rovers with head gasket problems are the most common cars turning up at Hyundai dealers on the end of a tow rope, while one 94 year-old Ashford man was late picking up his Hyundai i10 because a wheel had fallen off his Citroen on the way to the showroom!

Tony Whitehorn, Hyundai UK's managing director, said: "Our experience shows the scrappage scheme has really caught the imagination of the car buying public. For many it is an opportunity to buy their first ever new car, and is enormously exciting. Some people look a little embarrassed when they turn up at a showroom with an old car which is literally falling to pieces but we're happy to take anything as long as it meets the government's criteria. Other buyers have taken the decision to wave goodbye to cars which have been in the family for a generation, but their sadness soon disappears when they get into their new Hyundai."

This is a 13-year+ news article, from our Hyundai archive, which dates back to the year 2000.

If in doubt check with your local Hyundai dealer as car prices and technical data will have changed since 2009.