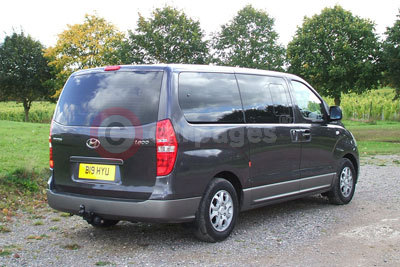 Style is the only trim level with standard features including; 16-inch alloy wheels, electric mirrors, electric windows at the front (the second row windows slide), front fog lamps, mood lighting throughout the cabin along with air conditioning, an automatic dimming rear-view mirror and the aforementioned, heated driver’s seat. The steering wheel is rake adjustable only but there is height-adjustment to the driver’s seat, in compensation.

The Hyundai i800 is the third of the company’s new vehicles to have an ‘i’ prefix and is, at present, a standalone car, priced at £19,495. There is a smaller engined and therefore cheaper version due shortly. In the meantime, the i800 comes in the one trim level and with a 2.5CRDi, intercooled with variable-geometry turbocharged, diesel engine, which is tightly packed into the short engine bay.

For a big bus, the performance is very good, even when fully loaded. The engine produces 170PS at 3,800rpm and 392Nm of torque between 2,000- and 2,500rpm but in lower gears, it pulls well from around 1,000rpm. The high torque figure and rear-wheel-drive layout has won the i800, The Caravan Club Towcar of the Year award for the £16,000 to £20,000 category. The judges also commented on the ride quality and manoeuvrability and ease of towing, saying “the i800 is a cracking load carrier, shows a lovely attitude when hitched and good access to towing sockets”.

Without a trailer or caravan on the back, the 0-62mph sprint is completed in 14.5 seconds and the top speed is a perfectly adequate, 113mph, where legal. The test week was particularly windy and on open roads the side-winds were felt but the i800 is heavy enough to cope without causing any dramas.

The ride is smooth with minimal road and engine noise. The car-like feel has a lot to do with the fact that the i800 is not built on a van chassis and has the benefit of a bespoke coil-sprung rear suspension system. On minor roads it behaves well and a lot better than one would expect, looking at its bulk, while motorway journeys feel relaxed and easy. ABS with EBD is a standard feature, as is traction control and ESP, which helps to reduce over-or understeer and that makes a huge difference to the driver’s confidence as well as the feel.

The fuel consumption is slightly better than that of the comparable, Mercedes Viano, which around £10,000 more expensive and a similar size but has a smaller, 2.2-litre engine and only six seats with an option for two more. The official figures for the i800 are 25.9mpg for the urban cycle, 39.8mpg for the extra-urban and 33.2mpg for the combined with emissions of 225g/km.

There are some omissions that need rectifying, such as the lack of airbags but, all in all, I thoroughly enjoyed it. The Hyundai i800 offers an engaging, relaxed drive and atmosphere as well as enough space for family holidays and associated luggage.

This is a 12-year+ news article, from our Hyundai archive, which dates back to the year 2000.

Hyundai i800 Images may not be UK specification cars. Colours and exterior and/or interior elements may differ from actual models.