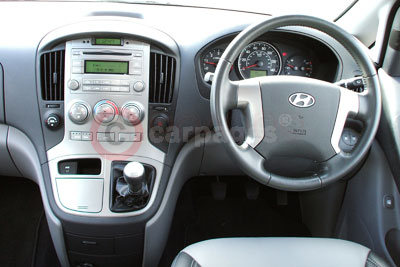 Hyundai i800 Review | Part One

That aside, the seats are comfortably, well padded and, in the case of the test car, clad in grey and black leather, which costs and extra £1,200. Although the tinted rear windows are larger than outward appearances would suggest, and allow plenty of light to penetrate, while affording a degree of privacy.

Now, having eight seats is an advantage if you have a taxi firm or a large family, but they cannot be removed, when not required. But even with the seats in place, there is a luggage capacity of 851-litres, accessed via the lifting, rear tailgate, which is so large that it could double as a bus shelter.

All of the doors are large and somewhat heavy. Those at the front have a silhouette a similar size to that of the body of a smart car and the sliding, second row of doors are in much the same territory. But it adds to the car’s charm and feeling of solid dependability.

On that subject, should an accident occur, the i800 has a four ringed strengthened body with rigid cabin and crush zones, impact absorbing bumpers, side impact intrusion bars and auto-unlock, on impact. Furthermore, the rear sliding doors are fitted with child locks and the middle row has ISOFIX child seat mountings, however, only the driver and front passenger have airbags, which is something of a drawback. Personally, I would rather have more airbags in place of the heated front seat.

Both sets of doors have storage bins for bottles and oddments, which is a benefit if there are family or friends on board, but those in the front are set just a little too low. When the doors are opened, they reveal a step, which means that floor level is just below the door bin when it is closed. This is all well and good until the door is opened to get out and more often than not, I stepped on the lip of the storage compartment and literally, tried to put my foot in it.

The interior is also car-like, particularly the driver’s environment. There is nothing between the front seats allowing access to the second row. The fascia is dominated by the large, silver-faced centre console; neatly flanked by the longitudinal, centre air-vents. At the base is an AUX point to compliment the integrated CD/radio system and next to this is the high-mounted, non-optional, 5-speed, gear-shift.

This is a 12-year+ news article, from our Hyundai archive, which dates back to the year 2000.

Hyundai i800 Images may not be UK specification cars. Colours and exterior and/or interior elements may differ from actual models.